Challenging the wall of 1/100 second, aiming for an effective hearing aid for the elderly

Japan is now becoming an aged society, where one in four people is a person aged 65 years or over. Mechanisms to support functions of the body which decline with age are essential for the elderly to live a safe and comfortable life. One of them is the development of hearing aids. Our School of Science and Technology is working on research aiming for the development of practical hearing aids.

Age-related hearing loss, or presbycusis, is a phenomenon that can happen to anyone 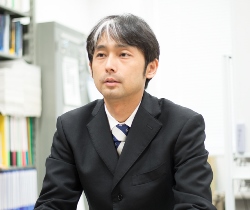 As people age, they gradually have difficulty in hearing sounds. In the past, hearing loss was believed to be caused by the weakening ability to distinguish or recognize sounds due to brain function decline, even if the sound is heard. Recently, however, it is said that ear functional decline is one of the causes. In simple terms, sound is the vibration of air. Sounds are gathered with the earlobe, amplified with the ear hole, and transmitted into the middle ear by the vibrations of the tympanic membrane. In the back of the middle ear there is an organ called the cochlea, where the cells with hair are densely lined up, and the hair changes the vibrations of the sound into an electric signal and transmits it to the brain. With age, however, the hair will weaken. You could imagine that weakened and deformed, feeble-looking hair cannot successfully pick up the vibrations transmitted. This is what is called age-related hearing loss, or presbycusis. Generally, this phenomenon is associated with the idea that “people will become hard of hearing with age.” In fact, hair cells in the cochlea are believed to be most densely arranged when people are born. There is no data of exact comparison of hair cells in infancy and later life, but the comparison between kindergarten children and elementary school children demonstrates that the hair cells are obviously more energetic in kindergarten children, hence their hearing ability is better. In other words, the decline in the hair cells of the cochlea is one aspect of the aging phenomena, and age-related hearing loss can be said to be a phenomenon that can happen to anyone, even if there are individual differences in its progression.

Characteristics of age-related hearing loss include gradual (not abrupt) difficulty in hearing, and, more specifically, difficulties in hearing high-frequency sounds in the beginning, in distinguishing the sounds of similar ranges, in catching words spoken fast, in hearing small sounds despite no problem with hearing as big sounds as before. Hearing aids are available as a tool to help with hearing loss, but they are currently not very popular. There is data which indicates that, of those 65 years of age or older who are aware that they are hard of hearing, only about 15% have a hearing aid. One big reason for not using a hearing aid is that users do not feel much of an effect when wearing a hearing aid. According to these users, when watching TV by themselves at home, they feel it is easy to hear the sound with a hearing aid, but when going outside, where there are various sounds, they still cannot hear the sound well with the hearing aid and sometimes the sounds are so noisy that they prefer not to wear it. The comparison of the hearing aid with glasses would make it easier to understand this phenomenon. So-called bad eyesight is generally caused by the decreased function of the crystalline lens of the eye, which takes in light and conveys it to the retina, and the retina that conveys the signal to the brain has not declined. Accordingly, eyeglasses are used to correct the light coming in. In the case of age-related hearing loss, however, the function of the ears that take in and convey sounds is not weakening, but the hair cells of the cochlea that pick up the sounds taken and convey it to the brain are weakening. Therefore, the hearing aid is equipped with various contrivances such that the hair cells functioning to some extent can easily pick up the sounds using digital signal processing technology. However, it is very difficult to resolve all the characteristics of age-related hearing loss, in such a way that small sounds can be heard without noisiness, the sounds of similar ranges can be distinguished, and fast spoken words can be caught. Restoring original hearing with a hearing aid is said to be impossible, unlike restoring the eyesight with eyeglass. However, the technology of digital signal processing is progressing. Efforts to develop more comfortable hearing aids suitable for age-related hearing loss are progressing in various ways. 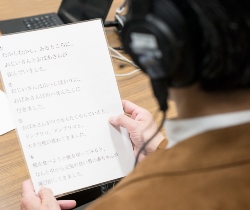 Tests with an acoustic delay generator

For instance, the technology of changing the speed of sound without changing the pitch has been studied for many years, and the technology was established to some extent in the 1990s. The technology has been applied to mobile phones for the elderly and electronic musical instruments. This technology can change the speed of speech to an easy-to-hear speed or change high-pitched sounds that cannot be heard by those with age-related hearing loss into the sounds with an audible sound range. However, there is a problem with incorporating this technology into a hearing aid. It is what is called 1/100 second wall. That is, if there is a time-lag between the incoming sound and the outgoing sound, a sense of discomfort arises, and therefore we need to keep the time-lag within 1/100 seconds. Actually, we do not notice or mind a gap in time between the image we see and the sound so much. For example, in television filming, a time-lag between the images and sound occurs, varying according to the positions of the microphones, so that technicians adjust them. But it seems not to be so severe. However, if we hear our voice with a time-lag after we utter the sound, we will feel a sense of discomfort and confusion. There is a worldwide award called the “Ig Nobel Prize” awarded in order to “honor achievements that first make people laugh, and then make them think.” In 2012, Japanese researches won the award for creating a device called the “Speech Jammer.” This device causes your voice to be heard with delay of about 3/10 seconds after you talk. If you try to make speech while using this, you cannot continue to speak. The delay of 3/10 seconds causes confusion to such an extent that people will become unable to speak. Accordingly, it is an implicit rule that the time-lag within 1/100 seconds should be maintained in order to use the hearing aid without discomfort. However, in digital signal processing, what can be done expands as the longer data is acquired. For example, with 1/100 seconds, tones of closely spaced frequencies cannot be separated unless they are 100 Hz apart from each other. Voices of adult males have a frequency of roughly 80 Hz to 160 Hz, so it is impossible to experience the adequate effect of separation. With 5/100 seconds, we can theoretically separate frequencies 20 Hz apart. Accordingly, we will be able to expect the possibility of distinguishing even multiple male voices. At the same time, it may become possible to modify sounds in inaudible high-frequency ranges to sounds within an audible range, to change the speed of fast speech to a speed that is easy to hear, or to make big sounds less noisy and make small sounds easier to hear. The ability to support these characteristics of age-related hearing loss at the same time can be more enhanced as more time could be afforded for processing.

However, a delay of 1/100 seconds or more is out of the question, if a person wearing the hearing aid feels discomfort. I have been gathering survey data from elderly people. I sometimes notice a phenomenon, which shows senior citizens do not care about sound delay so much. Accordingly, I took data from more than ten people. I got a score that shows they obviously care less about the delay compared with the data taken by the students. I believe that we can significantly improve the performance of the hearing aids dedicated to the elderly by taking much more data to determine how much delay the elderly can tolerate.