Many of you may have seen pictures of optical illusions. One example may be lines of the same length appearing to be of different lengths by adding extra lines. You may think that this is because such situations are intentionally created, but these optical illusions occur around us every day.

The phenomenon of optical illusions is not a mere mistake or misunderstanding but is caused by our brain’s function of interpreting what it sees.

There are various possibilities regarding depth from information given by a single flat image. Our brain instantly visualizes one of those possibilities. We can assume it is because our brain makes a decision based on past experiences.

Many of the results show that the brain perceives almost correct depth, so our brain is curiously excellent.

However, what the brain interprets may be different from the reality. That is an optical illusion.

For example, draw a three-dimensional object on a flat surface, draw squares on the surface, and apply different shades of color to each square. Even if the color shades of the squares whose faces appear to point upward and downward are the same, they appear to be completely different shades. This illusion is called Adelson’s Corrugated Mondrian illusion.

It is because we usually live in an environment which is lit from above, and based on this experience, our brain assumes that the surface facing upward is brightly lit and the downward is weakly lit when we look at a three-dimensional figure.

This means that even though the shades are the same, the squares facing downward appear to be brighter because the brain compensates for weak lighting.

Our brain also tends to view shapes as a right angle or a perfect circle. When we look at a parallelogram or an ellipse, our brain interprets them as a square or a circle seen from an angle.

That is why, the shape, angle, and depth of what our brain sees differ from what they are.

This is one of the characteristics of our brain. It is said that, in order to instantly interpret visual information, our brain records or remembers the shape of objects as simple right angles, perfect circles, and highly symmetrical shapes that require less information.

Optical illusions arise from the brain function, which is in response to the work required of the brain. Without this function, humans would probably not be able to live.

I do not think it is possible to prevent the brain from creating optical illusions.

If you still want to avoid optical illusions, you may want to use senses other than vision, such as by touching it, or to look at it from the side or the back not from just one point.

According to the traffic accident statistics in 2016, more than half the number of fatal accidents on curves are due to a single vehicle crash. When we hear that, we tend to think it is due to driving too fast, but why did the driver go too fast on the curve?

In fact, depending on the road structure, some optical illusions may occur because the curve appears to be gentler than it is.

If noise barriers are close to the edge of the road on expressways, or if there is a curve in a tunnel, the barriers make it impossible for drivers to see beyond the curves. This means that the driver is just shown a short arc. Therefore, the curve appears to be gentler.

Without the barriers, the driver could see the curve farther, which means the driver will be shown a long arc and find out that the curve is severe.

As the curve appears to be gentle because of the barriers, the driver will end up going into the curve without slowing down the car. In other words, drivers will not think they are going too fast.

It would be practically difficult to remove the noise barriers or widen the tunnel just because the road structure was turned to be the cause of the Tolanski curvature illusion.

There should be a road sign that warns drivers by a text such as “The next curve is sharper than it looks,” but it takes time for the letters to reach our brain and make sense, so the effect would be limited.

Painting a picture on the road or the wall to show that the curve is sharp may be also effective. However, it would intentionally deceive drivers. I doubt if it really leads to safety.

The most important thing for us is to know correct information. I think it is essential for drivers to have knowledge about the mechanism of optical illusions and understand that not everything they see is correct.

Utilize the mechanism of optical illusions in society 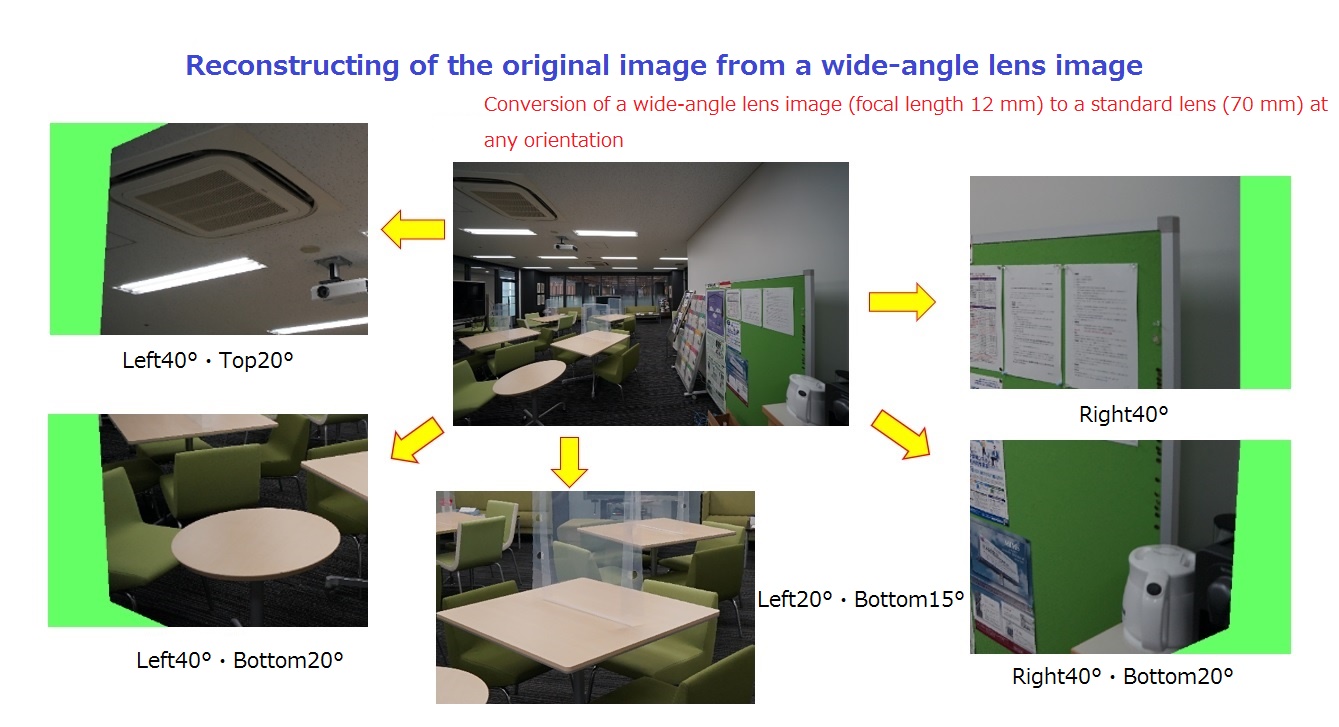 With the recent popularity of online shopping, many people shop by looking at products on their computer monitors. In this case, optical illusions are more likely to occur because three-dimensional objects are viewed on a flat monitor.

To give an example of such an optical illusion, a room seen on a hotel reservation website appears to be larger than it is.

On the other hand, in a photo taken with a wide-angle lens, objects seem to stretch toward the back of the photo. Vertically long shapes may become horizontally long, or perfect circles may stretch into ovals like the shape of an old Japanese coin. We assume it is because objects look distorted when they are taken with a wide-angle lens. But, actually, it is not that.

Our brain sees a photo of the room taken with a wide-angle lens from the focal point it sees on a daily basis. Then, the room appears to be very deep.

In addition, as we have the experience that the ceiling height is roughly three meters, based on that height ratio, our brain can visualize the length of extending lines toward the back of the room. And then we feel that the room is very spacious.

Of course, the photographer may not intend such an optical illusion, but the viewers cannot avoid this illusion as long as they look at the photos on a flat monitor.

That is why I have developed a new technology whereby, if the focal length of the camera is known, the photos can be reproduced to the images that a human would see.

This system can help users specify their desired angle on the monitor and, accordingly, see the images as if they actually see. This can reduce misunderstandings among users and unnecessary problems.

I suppose that the brain processes visual information in parallel at both high and coarse resolution.

Eventually, these processes are integrated and brought to consciousness as the optimal perception under the circumstances at that point, so we are not aware of the processing process.

Assuming that coarse-resolution processing is also performed, it would be possible to provide a unified explanation for the mechanisms of many classical illusions that have given rise to various arguments.

Optical illusions occur all around us, which may lead to all sorts of accidents and problems.

I believe that providing you with correct knowledge about optical illusions and developing technologies to mitigate their impacts by figuring out the mechanisms will lead to reducing such accidents and problems.

* The information contained herein is current as of April 2022.
* The contents of articles on Meiji.net are based on the personal ideas and opinions of the author and do not indicate the official opinion of Meiji University.
* I work to achieve SDGs related to the educational and research themes that I am currently engaged in.