Have you heard of the Cross-ministerial Strategic Innovation Promotion Program (SIP)? It is a national project to bring about innovation in science and technology, and is positioned as one of the “National Emphasis Programs” which will be key to opening up Japan’s future. 11 challenges have currently been set for the SIP, one of which is “innovative combustion technology.” This is research relating to vehicle engines. Why is research into gasoline and diesel engines now key to opening up Japan’s future?

The reason why research into diesel engines is a national project 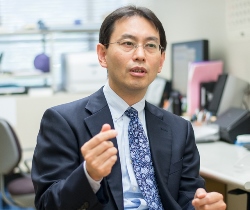 Until now, national projects have been taken forward under the leadership of the relevant government ministry. However, since this approach makes it hard to respond to large-scale initiatives and tends to lead to a silo mentality, the Cross-ministerial Strategic Innovation Promotion Program (SIP) was launched as a project which could cross boundaries between ministries and established fields, enabling issues to be tackled in a cross-sectional manner. There are currently 11 challenges, including “innovative combustion technology” alongside issues such as “self-driving systems” and “energy carriers.” “Innovative combustion technology” is a research and development project into innovative technology for vehicle engines, and comprises four teams: “Gasoline combustion team,” “Diesel combustion team,” “Control team,” and “Loss reduction team.” In my research laboratory, our largest project is for the “Diesel combustion team,” and I am leading the group of four universities which are involved with this team’s research.

Many people may find it strange that research into diesel engines should be a part of this innovation promotion project which will open up a path to Japan’s future. If we accept everything the mass media and automotive manufacturers tell us, we will end up believing that the age of electric and hydrogen cars is just around the corner. However, energy experts not only in Japan but also around the world are predicting that cars powered by engines will continue to have a 70% to 80% share even 30 years from now. Of course, this is not to deny the place of electric or hydrogen vehicles. I hope that those researching and developing these technologies, including renewable energies, will continue to do their utmost. Nevertheless, at present, if we take into account the total CO2 emissions and cost, from the generation of electricity to its transmission, storage, and consumption (running the vehicle), diesel engines (hybrids) come out on top. If we were to change the engines of all the vehicles in the world over to motors right now, there would be major problems. The fact is that on a global scale, diesel engines are superior. This is the reason why it is estimated that cars powered by engines will still be the norm in 30 years’ time, and it is what makes continued technological innovation to increase the fuel efficiency of engines all the more necessary.

Making the competitive edge of diesel engines, which have markedly lower CO2 emissions, even more pronounced

In Japan, diesel engines account for only a few percent of cars, but in Europe they are said to be in the majority. Their unpopularity in Japan is due to the entrenched image that they emit dirty, smelly exhaust fumes, have noisy engines, and vibrate a lot. In the 1970s in particular, environmental damage and air pollution caused by smog became social issues, the nitrogen oxide found in exhaust gases was recognized as a problem, and regulations became stricter. Gasoline engines used catalysts to remove nitrogen oxide, but since diesel engines were characterized by a unique trade-off meaning that a reduction in nitrogen oxide emissions resulted in more smoke, they came to be seen as smoky, dirty, and smelly. In Europe, on the other hand, it was acknowledged that a balance had been achieved between emission controls on nitrogen oxide and smoke. Also, increasingly good diesel engines were developed in Germany, and diesel engines came to be appreciated for their fuel efficiency in comparison with gasoline engines and superior torque and drivability. Even though light diesel oil is not cheaper than gasoline, as it is in Japan, the superiority of diesel engines was accepted by the market. Moreover, once global warming came into the limelight, the far lower CO2 emissions of diesel engines also came to be seen as a significant merit.

The low CO2 emissions of diesel engines are due to their fuel efficiency, which in turn is because diesel engines are thermally efficient. While the highest rate of thermal efficiency currently found in gasoline engines is around 39%, that for diesel engines is 43%. In the SIP “Diesel combustion team,” we aim to raise this thermal efficiency above 50%. However, this is not easy task. Automotive manufacturers around the world have made various technological innovations over many years, raising performance by 1% at a time. In our group, we are pursuing a jump in thermal efficiency by working on the “reduction of late combustion.” Diesel engines are constructed so as to compress the air which has been charged into the engine, raise it to a high temperature, and inject the fuel into this air so that it combusts. Making this injected fuel burn up completely in a shorter time leads to a more efficient engine. This is what the “reduction of late combustion” means. In order to shorten the time required for complete combustion, it is important to mix the fuel instantaneously and evenly with the compressed air. 1/100 of a second is far too slow: our goal is to mix the fuel in 1/1000 of a second. However, the shorter the time taken to mix the fuel, the more difficult it becomes to mix it evenly.

“Let there be light” from multiple angles gives rise to breakthroughs 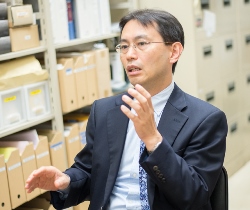 As I mentioned, SIP is a project which takes a cross-sectional approach. More than 40 universities and research institutes are participating, with systematic support from companies in the private sector. Conventional university-industry collaborations for automotive development took the format of joint research between individual manufacturers and individual universities. In this project, however, there are four universities participating in my group alone. Each university has specific research strengths, and we bring our knowledge to the table from those respective standpoints, exchange opinions on a daily basis, and share data. Attacking the problem in a multilateral way, from different angles, is incredibly effective and important. This is because it allows us to make use of new ideas and inspiration without being held back by the sense that an expert who has been involved with engine development for years might have that “That’s impossible – it goes against everything we know!”

As a matter of fact, I was not an expert in engine development, either. As a student, I belonged to a laboratory which studied engines, but my specialism there was optical measurement using lasers. My research involved laser measurement of combustion and the process of soot particle formation and oxidation within diesel flames. During the research planning phase of this project, engineers working for automotive manufacturers told me in detail about their research needs, and I first thought as hard as I could about how to make full use of my field of expertise, optical measurement. Every automotive manufacturer without exception uses optical measurement, but as the result of my deliberations, I was able to propose the application of the latest type of optical measurement. The measurements which we obtained using this method enabled us to discover that making use of something which is “impossible – it goes against everything we know” actually brings about a positive result. After repeated experiments, we are producing results which show that we are on the verge of realizing our goal of the “reduction of late combustion.” My experience has convinced me that this approach of putting things that we have just learned using new measurement techniques to use in engine development is absolutely necessary in order to break through high barriers like the one in this project. This is not due to my contribution alone; when a range of experts from other fields get involved in engine development, bringing new approaches to the project, breakthroughs suddenly occur. In this sense, “diversity” is an important keyword for research and development, I believe.

At the beginning of Genesis, in the Old Testament, are the words “Let there be light.” Although with a different meaning from that of the original, these words are symbolic for me, having specialized in optical measurement research. When we attempt to work on some kind of problem, we should shine a light on it and look at it properly. We should not be limited by precedents or generally accepted knowledge, but should look hard with our own eyes to see and understand what is happening right now. By doing so, we will be able to grasp key points in order to think about how to tackle the problem. I believe that this process is the same in all research fields. By tackling issues in various fields with the approach of “Let there be light” from multiple angles, I believe that it is possible to make major innovations and break through the status quo.

* The contents of articles on M’s Opinion are based on the personal ideas and opinions of the author and do not indicate the official opinion of Meiji University.