In the new Course of Study, scheduled to be implemented in FY2020, foreign language (English) study will become a compulsory subject for upper elementary grades (Grade 5 and 6), and foreign language activities currently geared for Grade 5 and 6 will be applied at the middle elementary grades (Grade 3 and 4). However, simply accelerating the start time of learning will have little effect unless the quality of learning is also enhanced.

English learning for children needs to be well designed 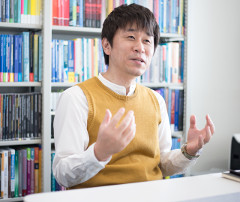 Children (elementary school students) are said to be linguistic geniuses – because of this, many adults may think the sooner children start learning English the better. Certainly, any child learns his or her own native language naturally. Some studies have shown that it is possible because it is their mother tongue. According to studies in English-speaking countries, children are believed to be exposed to the shower of their native language from people around them for about 17,000 hours by the time they turn age five. In Japan children at around the age of five will soon enter elementary school, and by this time they are usually capable of carrying out a certain degree of conversation. If it takes them 17,000 hours to acquire this level of conversational skill, it means it will take us 16 years to learn English with three hours of daily English study. After all, children can learn to speak their language naturally because they are constantly showered by their mother tongue and an enormous amount of linguistic input is relayed to them during this large amount of time.

A number of studies, especially overseas, have also shown that those who start foreign language learning (English) after they have grown older have better grades than those who start foreign language learning at an early age. In fact, certain data also suggests that it takes about 2,200 hours for American adults to learn Japanese. This is much shorter than the time required for children to learn to speak their mother tongue. This is because children are good at “unconscious learning” in which they memorize what they hear while adults are good at “conscious learning” using their developed cognitive ability. In other words, if adults are fully aware of the purpose of learning English, such as doing business in English and reading English books, and can engage themselves in studying with high motivation and concentration in an autonomous manner, they can quickly acquire English. Even if young students in the middle elementary grades (9 to 10 years old) start learning English, one hour-class once a week is not sufficient to relay to them a large amount of linguistic input. Additionally, they do not always have a clear sense of the purpose of learning English in the first place. An early start simply does not guarantee desirable results. This is why it is crucial to design an English class well and creatively so that the amount of linguistic input as well as the quality of input can be optimized to suit the kind of learning environment in an elementary school.

Dispatch of native speakers and collaboration with local universities

Then, what can we do to enhance the amount and quality of linguistic input for elementary school students? The answer for this is to train students to engage themselves in learning continuously and autonomously, as seen in the language learning by adults. And this type of learning should be based on motivation. First of all, it is important to get students interested in English to increase their motivation for learning. In fact, many elementary schools and local governments have already initiated efforts to attain this goal.

One such effort is the employment of ALT (Assistant Language Teacher) who assists Japanese teachers in English classes. ALTs are native speakers who come to Japan through the Japan Exchange and Teaching (JET) Programme, which was founded by the Japanese government in 1987. They are employed by local governments, and assigned to local elementary, junior or senior high schools. This program is considered very effective, particularly at elementary schools because young students are more flexible toward accepting new things and ideas. Contact with ALTs helps promote understanding between different cultures and increase students’ interest in English. With this as a springboard, if students are motivated to speak English outside of class and learn English autonomously, the amount of linguistic input is also expected to increase.

However, not every local government has budgets to employ a sufficient number of native speakers. For such cases, local governments may collaborate with local universities. Foreign students studying at Japanese universities or Japanese students hoping to become teachers go to local elementary schools and teach English in collaboration with class teachers, and play or converse with students in English outside of class hours. Students in my seminar are also invited to local junior high schools, where they volunteer in such activities. Some local communities seek cooperation from senior volunteers who worked overseas at one time or had jobs in which they used English. A variety of efforts are underway to secure linguistic input.

What is called “best” learning method is usually difficult 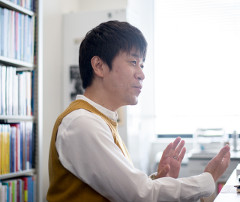 A variety of other efforts have also been undertaken in elementary schools. Some examples include the flipped class and the communication-oriented class. These are so-called active learning classes in which students share information with other students in pair or group settings from assignments they were given to research at home. They then present or discuss the information with the entire class. Adopting this style of English learning can help motivate students, leading to autonomous learning.

In recent years, some private elementary schools have been introducing the immersion education method, in which classes are conducted entirely in English, with the exception of Japanese class. This teaching method, originated in Canada, is also called CLIL (Content and Language Integrated Learning) in Japan. This method has shown to be effective to some extent. However, there is another argument that children should be taught their mother tongue, which is Japanese, solidly at first. For example, some children living overseas due to a parent’s work assignment, are submerged in English at school and in the community, and speak Japanese only at home. Children who grow up in such an environment may become perfectly bilingual, become weak in Japanese, or lose the ability to speak English when they start living in Japan again. Immersion education could produce different results depending on how it is administered, children’s individual personality traits and characteristics, or their circumstances.

That is to say, there is hardly a best method for learning English. It may be the best for teachers to be flexible in the use of teaching methods they believe to be more effective for each student while examining how students respond. To put it simply, this teaching style is called tutoring. Whatever method is used, such as native speakers, team teaching or students working in pairs, there are always students who are fun-loving and enjoy speaking English, and students who are shy and hesitate to speak. Some students may not even feel motivated to learn English. There could be many such cases in which teachers need to find ways to cope effectively with each student.

One example of a teaching method used for college students who aim to become teachers is that sometimes students are given choices on how they will complete their homework. An instructor presents several tasks from which students can choose instead of giving them all the same task. The same method may be used when giving them quizzes. For example, there might be two types of quizzes from which students can choose. One quiz consists of ten 10-point questions, and the other consists of two 50-point questions. Either quiz totals 100 points. Whichever task students choose, the amount they have to put into to complete the task will be the same. However, the fact that students are given options can significantly change their motivation and autonomy. I hope my students can utilize these methods and their own experience to discover better learning and teaching methods when they become teachers.

Some say Japanese people do not have the aptitude for foreign language acquisition. However, I think instead that the Japanese characteristic of working on the given task seriously and diligently makes them better suited for language learning. From this perspective, the fact that the university entrance examination now includes the four basic English skills (speaking, listening, writing and reading) can offer an opportunity for greater learning motivation. It should help students to have clear goals and motivate them to learn speaking as well. And English education given at elementary schools will also come to play an increasingly significant role. Many elementary school teachers are seriously trying to improve their English ability. However, the important thing is to help students to speak English more instead of teachers speaking good English. There are more and more situations where Japanese people communicate in English with other Asian people whose native language is not English. What counts most for us Japanese is to boldly express our ideas in English and understand what other people have to say. Speaking grammatically accurate English with perfect pronunciation is not important. The same can serve as a basis for teaching English.

Literary works have a mechanism for arousing the imagina ...

Japanese lacquerware culture with a richness not found i ...