From the 20th century to comfort of the 21st century: Smart communities are under way

Summer in Japan this year was scorching, with new record-high temperatures being set in various parts of the country. Japan was also hit hard by a number of very powerful typhoons, with some areas receiving record-breaking torrential rains. These so-called “abnormal weather conditions” are, in fact, occurring all around the world—not just in Japan. As for the cause of these conditions, the finger is being pointed at global warming. There has been a global push to reduce emissions of carbon dioxide (CO2) and other greenhouse gases, and in Japan too, verification testing of smart communities (SCs) is under way, aimed at realizing a low-carbon society.

Verification testing of SCs began in Japan in 2011 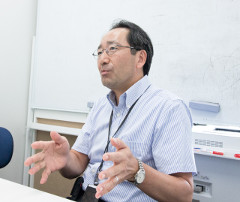 In line with the Paris Agreement, which was adopted at the 21st Session of the Conference of the Parties to the United Nations Framework Convention on Climate Change (COP21) in 2015, Japan has set a target of reducing greenhouse gas emissions by 26% from 2013 levels by 2030. I think this is a very tough reduction target. Japan, though, had already begun verification testing of SCs from 2011, prior to the Paris Agreement, in an attempt to take the energy savings that were being promoted on a sector-by-sector basis and to functionalize them on a whole-of-community basis. In other words, Japan was seeking to reduce energy consumption and CO2 emissions across entire communities by combining a wide range of sectors, such as power, gas and water on the energy-supply side, as well as industry, commerce, residential and railways on the consumption side. In terms of large-scale verification testing, four regional demonstrations were conducted by the Ministry of Economy, Trade and Industry (METI): Yokohama City in Kanagawa Prefecture, Toyota City in Aichi Prefecture, Keihanna Science City in an area stretching over Kyoto, Osaka and Nara prefectures, and Kitakyushu City in Fukuoka Prefecture. These four regional demonstrations were conducted until 2014, and they brought to the fore a variety of issues.

I joined the verification testing in Kitakyushu City. As a model for typical projects in regional core cities, the testing was conducted in a specially designated area where power was supplied by Nippon Steel & Sumitomo Metal Corporation. Cogeneration (a combined heat and power system in which gas, oil and so on are used as fuel to generate power, and the waste heat from the exhaust gas is also used for thermal demands such as for heating water and air-conditioning) was singled out to supply baseload power, and dynamic pricing was implemented for 180 residential consumers of power, whereby electricity rates are changed according to the demand situation. The results of four years of demonstration showed that CO2 emissions had been reduced by 25%. Surely this was a good result. However, there were questions about the calculation. As it happens, this number was calculated by collecting figures on expected reductions in various sectors in the area, and aggregating them. Independently calculating the effects in each sector was the only available option: there was no single model for calculating efficiency across multiple sectors. Nonetheless, this cannot give an accurate evaluation of the SC initiatives. For example, if we look at the daily activities of local residents, dynamic pricing means that on days when electricity rates will rise, they might take their family to a shopping complex or some other commercial facility. In this case, household power consumption drops, but since there are more people at commercial facilities, power consumption there would have consequently risen. If individual households and commercial facilities are considered in separate sectors, then the calculated figures will not be accurate unless the calculations also incorporate the relationship between those sectors. In other words, to evaluate efficiency for an entire community, rather than aggregating the evaluations of separate initiatives in each sector, we need a calculation model that incorporates connections and interaction between all sectors, such as power, gas, water, transportation, communications, industry, commerce and residential. This was the first challenge.

Accordingly, at the Institute of Electrical Engineers of Japan (IEEJ), gathering experts from the diverse sectors mentioned above, I coordinated development of an SC model that describes the flow of energy, including the connections among the various sectors in an SC. By doing so, we were now able to conduct studies for reducing energy consumption and CO2 emissions across the whole SC. Of course, SC modeling has only just begun, and there is still a mountain of challenges ahead before a more precise model can be developed. However, conducting research on SC modeling has made these challenges clearer.

Previously, reductions in energy consumption and CO2 emissions were accomplished by separate and independent optimization of each sector. The SC model perspective, though, shows us that individual optimization and optimization of the community as a whole are different. For example, energy consumption and CO2 emissions in Japan peak in the afternoon during summer and at night during winter. Electricity, gas and other infrastructure companies invest in plant and equipment according to these peaks. This means that we should be able to reduce our social investment by lowering these peaks. Moreover, the efforts and technologies necessary for this become evident. Take the sewage treatment sector in urban areas for instance. The amount of sewage peaks in the morning and at night. Since processing sewage takes a certain amount of time, energy consumed at a treatment plant for processing morning sewage peaks at midday. During summer, therefore, this will coincide with the peak hours of energy consumption for the community as a whole. Nevertheless, viewed from the individual perspective of the sewage treatment sector, the best way of processing sewage efficiently is to keep the volume of sewage flowing into a treatment plant constant. This is because, if sewage is left inside sewer pipes, various bacteria increase in number, and conventional processing will not be fast enough to maintain water quality standards when discharging treated effluent into rivers. Viewed from the perspective of optimizing the entire SC, though, the best course of action would be to temporarily suspend the flow of sewage into the treatment plant during the peak daytime power load, and to let it accumulate in the sewer pipes. In other words, for total optimization of SC, the challenge in the sewage treatment sector is not to process sewage quickly without leaving waste water inside sewer pipes, but rather to process accumulated sewage to an appropriate degree of quality at a different time of the day, even if it takes longer. This will necessitate improvements in technology and function designed to enhance processing speed.

In a sense, humanity has built communities in the pursuit of comfort. We have prioritized comfort and convenience over the resolution of environmental problems and the reduction of CO2 emissions. I think the time has come for us to reconsider this approach. Since an SC is in itself society, transitioning to a low-carbon society cannot be our only goal. In promoting SC modeling, I believe that it is also important to consider the questions of how to perceive the happiness of people and how to rebuild society.

Changing the future of the world with Japanese-style SCs

SCs also highlight challenges in the global strategies of Japanese companies. A number of Japanese industries that were sweeping across the world at the end of the 20th century have been on the decline in recent years, losing their predominance to the commodification (popularization) of products. In response, they have sought to develop products that cannot be achieved by simply optimizing and integrating technologies. Exporting infrastructure is the area that shows most promise. One of the purposes for Japan starting verification testing of SCs early on is because it viewed SCs as an effective export product. In reality, in the present-day global goal of reducing CO2 emissions, Japanese technologies could be applied to industrial parks and other similar sites in Southeast Asia. However, to promote Japanese SCs, return on investment must be able to be quantitatively presented. SC modeling is also essential for this purpose. As it happens, developed countries are engaged in public-private initiatives in promoting sales of SCs. For example, in countries like the United Kingdom, members of the business community are transferred for a fixed period of time from the private sector to a government agency, where they promote a project on the authority of the agency. I believe that, in Japan too, in order to give support to public-private initiatives, we must promote development of more precise models for SCs.

Japan must also take the initiative in establishing international standards for SCs. Standardization in the field of electrotechnology is promoted by the International Electrotechnical Commission (IEC), but 39 of the 69 votes at the IEC are cast by members of the European Union. In part to also counter the EU, and for the permeation of Japanese technologies, I believe an “all Japan” effort for standardization of SCs, which also involves the national government, is important.

As mentioned earlier, I think we are now in a period of transition to rebuild society. It will be the next generation, though, who realizes this transition. It is my view that we must nurture the next generation capable of exercising greater wisdom and taking action in breaking down the current situation and instigating change. I hope that ordinary consumers will also show greater concern and awareness for energy conservation and environmental problems, and will demonstrate this in their voices and actions. The louder people speak out, the more government action will change, as will the future.