Herpes virus is known as the cause of herpes, a disease with symptom of painful or itchy, small blisters around the lips and on the genitals. Recently, this virus has attracted attention due to on-going research to investigate if the virus also causes infertility. 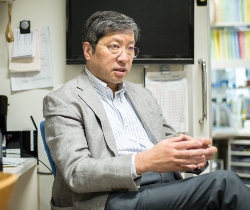 There are eight known herpes viruses that infect humans. Of these, Herpes Simplex Virus Type 1 affects areas around the lips and on the genitals. It has been estimated that 70 – 80% of the total Japanese population has the Type 1 virus. Herpes Simplex Virus Type 2 is generally responsible for genital herpes outbreaks, and it has been estimated almost 10% of the population has the Type 2 virus. Hence, we can say these viruses are very common. People infected by herpes virus do not always immediately develop symptoms. The virus remains latent in ganglia and spinal nerves, causing symptoms in times such as when the body’s immune system is weakened. The relationship between herpes virus infection and infertility has been mentioned and investigated, but conclusive elucidation has yet to be obtained.

The rat experiments revealed that thymidine kinase of herpes virus origin disrupts spermiogenesis and triggers male infertility. But we did not know how it applies to humans. Through collaboration with obstetricians and gynecologists in China, we were able to obtain and study samples from male infertile patients. We found that thymidine kinase of herpes virus origin is expressed in the testis in some cases. Herpes virus infection, however, does not automatically cause infertility of the carrier. When certain factors cause the herpes virus gene to be expressed in the testis, spermiogenesis becomes abnormal. We do not know what factors cause this expression. Also, we have not resolved how the expression of a herpes virus gene, particularly the thymidine kinase gene of herpes virus origin, results in inablity to generate sperm. The puzzle even deepens as we see no change in the cells surrounding the pituitary gland, where the enzyme gene is expressed. Far more research is required to identify what affects spermiogenesis.

If herpes virus infection was proved to be one etiology for male infertility, and the underlying mechanism is uncovered in the future, this research could advance into the development of diagnostic and therapeutic methods and medicines. If this research reveals the fundamental mechanism of sperm generation, it can also help develop a method to make spermiogenesis more stable, leading to enhanced reproduction capability. Expression of thymidine kinase of herpes virus origin in round spermatid cells during spermiogenesis causes abnormality or disruption of spermiogenesis. Elucidation of this mechanism might also lead to development of a male contraceptive, which temporarily disturbs spermiogenesis only when administered, without permanently shutting down spermiogenesis. In this way, one result from basic research can grow into various applications. 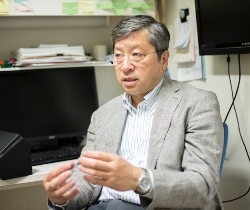 My primary focus is actually on basic research, including regulation of pituitary hormone gene expression and pituitary organogenesis and differentiation. As a common method used in this type of research, we produced transgenic rats. And in the process, we discovered that a thymidine kinase gene of herpes virus origin was expressed in the testis, and noticed abnormal spermiogenesis in male rats. In basic research, we first need to understand and identify what condition is normal before starting further experiments. This effort sharpens our sensitivity to notice abnormality. As a result, we think out how normal condition becomes abnormal, which, in turn, leads to better understanding of what is normal. As outcomes of applied research directly link to our lives, they often attract a great deal of public attention. Basic research, though it may appear quieter, can also be meaningful.

A single researcher would find it a huge burden to handle all the basic and applied research by him/herself. Realistically, it would be impossible in most cases. Hence, the communication between researchers in basic and applied research is necessary and important. This research on herpes virus and infertility started when a simple question emerged during our untiring experiments for a different theme. The research found its way and has developed through collaboration with obstetricians and gynecologists in China. I hope the students who are currently learning about various kinds of research remember to value basic research, and not be swayed only by the outcomes of applied research.