A Proposal for a Globalized World: Globalized Constitutions -A Multi-layered System for Protecting Human Rights-

The Perspective of International Community on Constitutions

The world is in constant motion. In countries that experience dramatic changes, a debate usually arises after change has occurred (and sometimes while change is underway) on the enactment or revision of their constitutional code. In non-Western countries in particular, a large number of independent states emerged after the Second World War and a large number of constitutions came about. What is particularly interesting is the fact that the process of enacting constitutions in the modern age is a question that involves not only the country concerned but also attracts the attention of other countries and international community. The enactment and revision of constitutions is carried out under the gaze of international community. Even investors have input. In other words, we are now in an age when the content of a constitution can affect the reputation of a country. One example of this is the Constitution of South Africa (promulgated in 1996 and effective in 1997). The Constitution of South Africa, which abolished apartheid and allowed South Africa to rejoin international community, was regarded as “state-of-the-art” at the end of the 20th century (it goes without saying that the Constitution did not immediately solve all of the problems in South Africa). The memory of South Africa successfully hosting the 2010 FIFA World Cup, the first to be held on African soil, after starting out anew under a new philosophy remains fresh in the mind. Conversely, there are also cases of countries hastily revising the content of constitutions without sufficient transparency or deliberative democracy, such as Hungary’s 2011 constitutional amendment, and these cases are watched with alarm by international community. It also goes without saying that the enactment of constitutions by several countries after the Arab Spring has also been closely watched.

Synchronization of the Constitution of Japan and International Human Rights Treaties

What is Meant by Multi-Layered Protection of Human Rights? Legal Revisions Overseas and Recommendations from International Organizations 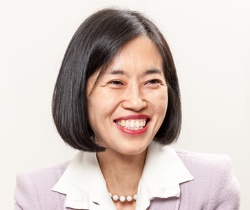 Last year, the Supreme Court of Japan made a landmark ruling. It held that a clause in the Civil Law stipulating that the legal inheritance share of a child born out of wedlock should be half that of a child born in wedlock was in violation of the Constitution, which guarantees equality for all under the law. This ruling has the potential to be extremely meaningful from the perspective of a “multi-layered system for protecting human rights”. In fact, the Supreme Court had previously ruled in 1995 that the same clause of the Civil Law was constitutional. So what happened to change the Court’s judgment? Put simply, this was the result of diversification in marriage and family models, and changes in people’s perceptions. However, in addition to this the Supreme Court also cited legal revisions overseas and recommendations from international organizations.
Why should legal revisions overseas be relevant? The reason is that Japanese law was modelled on Western law during the Meiji modernization and has been influenced strongly by Western law ever since. In the past, the law in Western countries also discriminated against children born out of wedlock. When a debate was held concerning revisions to the Civil Law in 1947, numerous legislative examples were referred to and these had an impact on Japanese law. However, since the second half of the 20th century many countries have set out to abolish legal discrimination. The Supreme Court has been paying attention to this trend. Specifically, in 1995 at the time of the ruling that Japan’s discriminatory laws were constitutional, weight was given to the fact that German law and French law still contained discrimination. There is one more important factor in the background to these legal revisions. In 1979 the European Court of Human Rights (a regional human rights court for 47 Member States of Europe), ruled that Belgian law, which discriminated against children born out of wedlock, was in violation of the European Convention on Human Rights. This ruling encouraged legal revisions in European countries. France, which was one of the last countries to retain discriminatory legislation, was ruled to be in violation of the European Convention on Human Rights by the European Court of Human Rights in 2000, and in 2001 France revised its laws.
Some may argue that these overseas developments have nothing to do with Japan. However, attention needs to be paid here to the fact that the Supreme Court also cited recommendations by international organizations. The United Nations Human Rights Committee and the Committee on the Rights of the Child have repeatedly made recommendations to Japan to revise discriminatory laws. As a signatory nation, Japan has an obligation to achieve the human rights guaranteed by human rights treaties. As described above, these treaties are participated in by numerous other countries around the world in addition to the likes of Belgium, Germany and France. Surely the following trend is now beginning to emerge: the initiatives implemented in various countries are having a cumulative effect on international standards, but at the same time, as international standards become established, these standards begin to permeate individual countries. A dynamic multi-layered and pluralistic structure (a multi-layered system for protecting human rights) has begun to appear whereby international standards and individual countries interact mutually in the establishment of human rights standards.

The Challenges Faced by the Human Rights Protection System

So what of the current system in Japan for guaranteeing human rights? The human rights set out under the Constitution of Japan were “state-of-the-art” at the conclusion of the Second World War. Japan has updated its human rights since then by ratifying a variety of different international human rights treaties under the system of the Constitution.
What significance does this have? Firstly, international human rights treaties not only provide for human rights in general (such as the International Covenant on Civil and Political Rights and the International Covenant on Economic, Social and Cultural Rights), they also focus on the human rights violations of vulnerable groups such as women, children and the disabled (the Convention on the Elimination of All Forms of Discrimination against Women, the Convention on the Rights of the Child, and the Convention on the Rights of Persons with Disabilities), and target behavior abhorred by all people, such as torture and racial discrimination (the United Nations Convention against Torture and the International Convention on the Elimination of All Forms of Racial Discrimination). Treaties now pay closer attention to “what the current issues are” based on the history of each country and current experience.
Secondly, the treaty organizations established by the respective international human rights treaties carry out monitoring of the status of human rights in the respective countries. By participating in a treaty, governments must regularly submit reports to the treaty organization on the status of human rights in their own countries, and treaty organizations carry out screening and assessments based on these reports. Human rights NGOs also have the opportunity at this time to provide information from a different perspective to that of the government. In modern societies, organizations such as companies and universities disclose information, and this information is used as the basis for deciding whether or not to invest, whether or not to purchase a product, and whether or not to apply for an admission at a particular university. It is natural to work hard to make improvements with an awareness of your external reputation, and organizations deliberately incorporate third-party assessments to increase the true value of assessments. The same thing can be said of states. Government reports and subsequent reviewing of these reports represent an excellent opportunity to learn about the human rights issues a country faces, and how (or whether) these issues are being tackled. The measures implemented in other countries may provide useful clues when thinking about the issues faced in your own country. Anyone would want to avoid reviewing if it was seen as nothing more than “criticism” from outside. However, if reviewing is seen as “information”, “advice” or “diagnosis”, then it can be utilized effectively. The ruling of the Supreme Court that Japan’s discriminatory laws are unconstitutional can be seen as a natural conclusion to the process of this long dialogue.
Could this long process have been sped up in any way? As pointed out by the Supreme Court, a recommendation from the United Nations Human Rights Committee had already been received as early as 1993. In fact there are already useful systems available. For example, there are methods that allow individuals to communicate human rights issues directly to international organizations (not yet ratified by Japan) and the establishment of national human rights institutions under the UN Paris Principles (not yet implemented in Japan). These methods offer a more effective way of combining international systems with national systems. The challenge faced in the integration of systems in Japan lies in the lack of a multi-layered system for rapidly utilizing opinions on human rights both within Japan and overseas.

Supporters of a Multi-Layered System

When you hear the phrase “multi-layered system” there is a tendency to image that this has nothing to do with you and that it is something decided by elected officials, judges and bureaucrats. However, in reality an individual citizen is able to seek multiple layers, or facilitate the achievement of multiple layers, in the guarantee of human rights. A good example is a draft process of the Constitution of Japan. After the Second World War, as a member of the GHQ Government Section Beate Sirota Gordon was involved in the drafting of the Constitution of Japan. She was responsible for drafting Article 24. Born to a Jewish family living in Vienna, Beate lived in Japan as a young girl before the war after her Kiev-born father (a famous pianist) was invited to teach at Tokyo Music School (currently Tokyo University of the Arts). War broke out between America and Japan while she was studying in America, and after the war she returned to Japan as an interpreter for GHQ. She was selected as a member of the drafting committee of the Constitution because of her ability to communicate in Japanese and her experience of living in Japan. She later described how she got hold of as many constitutions from around the world that she could get her hands on in Tokyo at the time, and (with numerous examples from her own personal experiences of the conditions faced by Japanese women clear in her mind) did everything she could to improve the position of Japanese women by trying to write clauses in the most specific manner possible (She also included clauses about the abolition of discrimination against children born out of wedlock, but this was later deleted in the interests of keeping the Constitution as concise as possible). As a Vienna-born Jewish American and Japanese (she recalled suddenly realizing during her time as a student in America that she felt more than half Japanese), surely Beate Sirota Gordon is one example of somebody who made full use of multi-layered and pluralistic perspectives and experiences.

Seeing Japan from a Perspective of the Globalized Constitution (宙 [Sora])