People have long spoken of the shift from products to services. While at first glance these words may seem to describe only the shift to a service economy, in fact they sound an alarm bell to the Japanese economy as a whole. Shifting our way of thinking to one that sees all economic activities as services, some of which involve products and some that do not, could bring new inspiration to the many Japanese SMEs that seem to have reached a dead end. 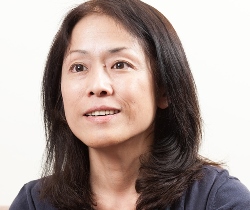 Q: Would you start by explaining what kinds of things are referred to by service research and service marketing, the subjects of your research?

Research in the fields of service management and marketing is relatively new, with a history of only about 50 years. The fact that they have begun attracting considerable attention in recent years is closely related to the changes that have taken place in the structures of the economy and industry. As an economy matures, it needs to shift toward services. Japan and the developed countries of Europe and North America are excellent examples. About 70% of Japan’s GDP comes from service industries. However, a shift to a service economy does not simply mean that industry shifts to services. What is important is that economic activities themselves shift toward services.

In the past service research saw products and services as polar opposites and stressed the importance of shifting to services. However, about 10 years ago a paradigm shift took place with the rise of service dominant logic. This is an attempt to rearrange economic theory through integration and fusing of products and services, revising the previous basic assumption that attempted to separate economic activities into products and services. There is an old maxim in the world of marketing that says that People don’t want to buy a quater-inch drill. They want a quater-inch hole. It can be said that Japan, which experienced economic growth as a manufacturing country, focused too much on improving the performance of the drill. The fact that we have reached a critical state in which simple pursuit of product performance alone is not enough to do business can be seen in the difficult straits seen among manufacturing companies. We need to adopt service dominant logic that fuses products and services, advancing a shift toward a service economy that delivers holes, not drills.

Q: Specifically what kinds of things are referred to by advancing the shift toward a service economy?

Traditionally it has been the enterprise that plays the main role in creating value. An enterprise aims to build value into its products (including both physical products and services) and get its customers to recognize the high level of that value. The customer’s role has been considered that of paying the price of the product to the company and consuming it. In other words, the goal of management was to maximize this exchange value, which was divided into production of value by the company and consumption of value by the customer. This assumes the presence of physical products and other products (i.e., services). However, under service dominant logic physical products and services are fused together at a deep level. Customers assume that the company’s activities and the actions taken by the customers themselves will continue to generate value in the process of use of the product or service. In other words, the company and the customer create value together (co-creation), and as a result the goal of management activities is not simply to maximize exchange value but also to help maximize later value in use. This is one form in which the shift toward a service economy advances.

An example is the “i-Phone” smartphone from Apple. Consumers do not purchase that device for the machine itself but to use it in their own ways, by downloading apps that suit their needs. This is a form of service dominant logic, or a shirt to a service economy, in which the physical product and services are fused together. Rolls Royce, which manufactures and sells jet engines, has shifted from its previous method of selling the engines to one of charging for the time the engine is in use. This is an attempt to provide value in accordance with the way customers use the products, as a result ascertaining customer information and delivering solutions based on the customer’s business, in areas such as maintenance, efficient flying, and operations. This builds a win-win relationship in which the company and the customer co-create value.

Corporate Value that Does Not Appear on the Financial Statements

Q: You conduct service research centered mainly on financial services and also act as a practical businessperson, for example by managing a consulting firm. Please tell us how you came to focus on service research.

After I graduated from college I joined a major bank, where I worked for eight years. There I sensed that the bank organization was completely lacking in customer orientation and marketing. While that was a time, when competition was said to be beginning with the financial deregulation so called “Finantial Big Bang” policies, there were no signs of change in the bank itself. After that I left too work at a computer vendor, hoping to change banks from the outside. I worked on a project that involved adopting data mining in Japanese finance. However, the customer information possessed by banks covered only the beginning and the end of transactions. It was lacking information needed in marketing such as customers’ feelings and thoughts in the process of purchasing a product. Thinking that a new approach was needed in order to transform the financial industry, I started up a consulting firm and entered graduate school. This is when I encountered service marketing.

I focus on financial services because the power of finance to distributed money, the lifeblood of the economy, is extremely important to revitalizing Japanese businesses and economy. Banks must change to implement customer-oriented marketing. In doing so, the service triangle of companies, employees, and customers is very important. There is a need to assess properly the value that each provides. For example, the value of a company that is a bank customer is not expressed on its financial statements alone. There is a need to ascertain other types of value, such as its emotional value and knowledge value, as well. I think that this will lead to the co-creation that I mentioned earlier. I believe that co-creation arises from the cycle in which a customer provides resources and high-quality resources result in provision of high-quality services within the service triangle.

Toward a Service Triangle of Co-existence and Co-prosperity 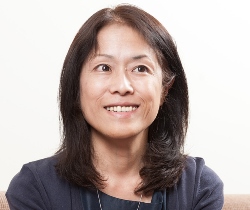 Q: Are there no things about which we should be concerned as the shift toward services advances in economic activities?

It is conceivable that the industry of manufacturing will undergo a change in its quality as the shift of the economy and businesses toward services advances. If we see all economic activities underway in the world as services, with some services involving physical products awhile others do not, then we also can see the provision of physical products as a type of service. Furthermore, if the use of robotics in manufacturing advances then most people would be employed in service industries. In the U.S. and other countries this has led to concern about polarization between the creative class and the service (working) class. The status of members of the service (working) class would be lower than that of robots, and in fact signs of this have been identified in U.S. manufacturing.

Structural reforms are needed in each field to match the progress of the shift toward services, which means a transformation from physical products to services and from ownership to use, and this could lead to some new issues as well. I cannot believe that a society polarized by a shift toward services would be a happy one. I would like to work on creating models and yardsticks for an appropriate service triangle that will enable coexistence and co-prosperity among many people.

* The information contained herein is current as of June 2015.
* The contents of articles on M’s Opinion are based on the personal ideas and opinions of the author and do not indicate the official opinion of Meiji University.