To people today, living in a global society, learning English or another foreign language is becoming a basic requirement. People need to learn foreign languages more efficiently both to succeed in the global economy and to improve their communication abilities. Keys to doing so are metacognition and interaction, to support autonomous learning.

Q: Ways of teaching foreign languages such as English are undergoing massive transformations. What are your thoughts on English-language education in Japan today?

While in some aspects it has changed in positive ways, in other aspects it remains completely unchanged. The new designated Course of Study now in effect calls for English classes in high school to be taught in the English language, and already at least 60% of high schools teach the classes in English, without using Japanese at all. According to a study by the Ministry of Education, Culture, Sports, Science and Technology, just a few years ago only about 5% of high schools did so. Today, in some prefectures such as Yamanashi, Hokkaido, and Aichi all public high schools teach English using the English language only. As a result, when hiring teachers as well true English-language ability is required now. Perhaps for this reason, this year many of the students in my seminars in the Department of Global Japanese Studies at Meiji University were hired as teachers. I believe that this probably is related to their English-language ability and their ability to teach in English.

However, I would have to say that there remains room for improvement in the content of high-school textbooks. They focus mainly on grammar. I think the problem may be with the secondary entrance examinations of national universities. Even now there are examples of exam content in the secondary entrance examinations of a number of national universities that perhaps could even be described as representing the English language of the Meiji Era.

Q: Would you say that English-language education remains behind the times overall?

A course of action has been identified for replacing the current National Center Test with a test to evaluate the academic ability of prospective university students in 2020. I think it would be ideal for private universities too to fully adopt external examinations measuring the four skills at that time. I support this course of action, and I believe that we should make full-fledged progress in that direction. This would mean that at long last the entrance examinations would be consistent with the designated Course of Study. This is important because it has been pointed out that there are problems with the English questions on entrance examinations in particular.

Speaking without Looking at Notes is More Persuasive 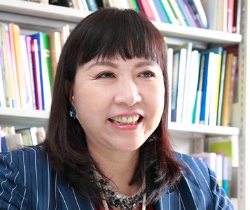 Q: What is behind the Japanese government’s demands for reforming English-language education at such a rapid pace?

I think that one factor is, after all, the needs of the business community. It is too difficult to succeed in the global economy with today’s level of English-language education. When businesses advance overseas, they find that their personnel are unable to negotiate and take part in discussions. English education based on grammar and translation do not result in successful presentations. Even after discounting for the fact that English is their native language, Americans have an overwhelming advantage in making presentations. They start learning about presentations in middle school, speaking in front of the entire class. Opportunities for such practice have not been available in Japan. This is why so many students were unable to state their opinions or make presentations in front of others. Still, this situation has been changing gradually. Now students take part in group work in middle-school and high-school Japanese or science classes, collecting the group’s views, writing reports, and presenting them in front of their classmates.

There is a pressing need to move in the direction of training human resources who can succeed on the global stage. This is true not only in the world of business but in diplomacy as well. I think it is wonderful the way Prime Minister Abe delivers his speeches without reading from notes. Until now, Japanese politicians always have read from their notes. If you understand the content in your head, it is a bad idea to read from notes. A speech made without notes sounds much more persuasive to the listener.

Becoming Familiar with Strategies for Learning 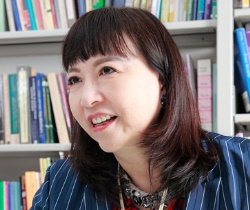 Q: What is important for mastering English-language abilities and powers of expression that can succeed on the global stage?

On the subject of learning languages, not just English, the time spent learning in school is absolutely not enough. To learn a language, one needs to study autonomously at a good pace. People who have mastered languages devote considerable time to studying on their own outside of class. They set their own goals, develop plans, choose educational materials, and strive toward their goals. The Self Access Center on the Nakano Campus was designed for this purpose.

Another important point is reflection, by looking back after one has reached a goal to some extent. This series of actions is governed by what is known in cognitive psychology as metacognition. As opposed to cognition, which refers to logical thinking such as analysis, synthesis, calculation, and summarizing, metacognition is a mechanism that controls all thought. It refers to setting goals, developing plans, thinking about methods and acting accordingly on one’s own. It even includes assessment of what may have gone wrong. It is said that the students who will succeed in academic fields and in work in the future will be those who have clear strengths in metacognition.

Autonomous Learning and Metacognition Support a Zest for Life

Q: Are there any specific learning methods that would be efficient?

An efficient way of learning is through controlling oneself the processes of setting goals, planning, choosing means, implementing them, and evaluating outcomes. A learning strategy refers to devising more efficient, useful methods as part of this process. For example, there are various ways of memorizing vocabulary words. One of these is grouping vocabulary words. As an example, given the vocabulary words such as grade, banana, orange, nose, mouth, and semester it helps to remember the words if we group banana and orange into the category of fruit, grade and semester into the category of school terms, and nose and mouth into the category of parts of the face. Other learning strategies are those of inferring from the context or from illustrations when encountering an unfamiliar word in a book. These learning strategies include elements of metacognition, and learners who use these strategies can solve problems by setting their own goals and review the process once they have reached a goal. In fact, China, South Korea, and Europe, as well as Japan, consider training such learners with metacognition, learners with the abilities needed in living, or autonomous learners to be part of their educational philosophies.

Japan’s designated Course of Study refers to the philosophy of “a zest for life.” This is just like the “strengthen the individual” that Meiji University extols. The philosophy of the designated Course of Study calling for teaching the ability needed for living is made up of the three elements of a balance of academic abilities, richness in humanity, and health and physical strength. Of these, a balance of academic abilities refer to the abilities to set one’s own goals, solve any problems that may arise, develop plans, and then review the process once a goal has been reached.

The Birth of Standards for Entrance Examinations and Measurement

Q: You’re referring to the adoption of shared international standards in Japan too, are you not?

Exactly. Europe has a shared reference framework called the Common European Framework of Reference for Languages (CEFR). The CEFR is based on two philosophies: fostering autonomous learners and developing intercultural communicative competence which means the ability to build constructive relationships with others by respecting each other’s perspectives. Thus, it values the spirit of attempting to understand each other as independent people having multiple different linguistic and cultural backgrounds and to respect each other’s differences.

Today, the Ministry of Education, Culture, Sports, Science and Technology is comparing the levels of Japan’s certifying examinations, such as the Eiken tests, with those of TOEFL iBT, TOEIC, and other exams, all of which are based on the CEFR. The CEFR would appear likely to serve as the framework for future entrance exams incorporating the four skills.

Q: What kind of practical efforts are being made in the Meiji University Department of Global Japanese Studies and in your seminars to help students develop communicative competence needed in the global economy?

Although I will not go into the specialized details here, my specialty is applied linguistics, and I base my practice on theory from that field. The average TOIEC score of entering students in the department can be 715 points in a half year. When learning a language, it is not just the inputs of reading and listening but also the outputs of writing and speaking that are important. Interaction is important as well. Students’ English improves steadily through speaking with and helping out each other. Time for speaking, for which there are few opportunities in everyday learning, increases massively through interaction in group work.

The department also employs a system of office hours, in which students, at a time that is convenient to them, can discuss specific topics with native-speaker instructors. We also focus efforts on writing. A student cannot improve his or her language abilities without being able to write. On this subject, we have adopted the Process Approach. For example, when writing an essay on a recent social issue, students first discuss it in groups and then write their own individual essays. Next, the students exchange their essays with each other and write comments on them. Students revise the essays based on those comments. After that, the instructor reads the essays and writes comments on them, and then the students again revise them based on those comments. In this way, they revise the essay a number of times. If a student wants to rewrite an essay, he or she can do so at any time through the end of the school term. All drafts, from the first to the final, are retained in the student’s portfolio. At the end of the term, the instructor collects the students’ portfolios and takes into consideration the degree to which the students’ writing has improved when grading. Thus, students’ grades reflect a process rather than a result.

Whatever the case, it takes effort to learn a language. Unceasing effort and interaction. It also requires metacognition. It is important to be an autonomous learner that has these strategies and motivation.

Q: From what you say, it is clear that English education in Japan will undergo some massive changes in the future. Thank you for your time today.