The Abe Government’s Policies to Promote Women in the Workplace

The Abe government considers the promotion of women in the workplace as an important topic for advancing Japan’s growth strategy. For many years I have studied the issue of enabling women to demonstrate their abilities in the corporate organization, and I welcome this national goal of promoting women in the workplace, although there remains room for debate concerning specific measures. I believe that the way Prime Minster Abe’s statements have laid the groundwork for discussion that considers the success of women in the corporate organization to be an important issue represents substantial progress.
A full-fledged national system is being developed to work toward the goal of having at least 30% of leadership positions foiled by women by 2020 in all areas of society (the so-called “30% by 2020” goal, decided on by the Gender Equality Bureau in 2003). The bill intended to promote women in the workplace under discussion in this session of the Diet (autumn 2014) also is a part of the development of an infrastructure to help women succeed. In response to these moves by the national government, individual companies also need to implement their own initiatives. Specifically they need to develop human-resources management from a gender perspective and collect and review information on successful practices in various organizations in the past.

Why I Headed for Academia after Being a Full-time Homemaker 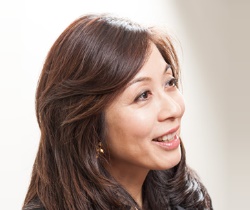 After graduating from university, I worked as an announcer for Fuji TV and then left the workplace after getting married at age 27 to become a full-time homemaker. While this was my own choice, once I became a full-time homemaker I sensed that my position had become that of the wife of the house rather than an individual woman. I wondered just who I was, and just what my career through then had been about. I started to feel doubts and discomfort about being a full-time homemaker. That was when I realized that academia was where I could put my own abilities to maximum use in society while still valuing home activities, by working independently with a high degree of freedom and at my own discretion to acquire specialized knowledge.
While rearing a baby I resolved to enter graduate school to study business administration. Ultimately I chose research themes including HR systems and use of human resources in the corporation from a family sociology approach. There are many similarities between Japan’s family system and its employment environment, and focusing on the new ideas on employment practices in demand as the old family system changes led directly to my current research topic of overcoming the gender framework.

The Unchanged Values of Japanese Corporations

The gender roles of the family system have been transplanted unchanged into the corporate organization. But can this be described as a sound system? There is more than a little possibility that division of roles by gender could oppress people’s self-realization, dreams, and pursuit of happiness. And it is mostly women who feel the brunt of this oppression.
Right now, women have only very limited opportunities to succeed in Japanese companies and the organizations in place are not ones that enable them to demonstrate their abilities to the fullest. While nearly 30 years have passed since the enactment of the Equal Employment Opportunity Act for Men and Women, it is a fact that in various aspects including hiring, evaluation, appointment, promotion, and pay women are treated differently from men. Within the organization there is both visible discrimination and invisible discrimination that is accepted as a matter of course without even noticing that it is discriminatory, and thoroughly eliminating these forms of discrimination will of necessity involve considerable difficulty. There is a close relationship between gender roles in the family, the gender roles that have permeated Japanese society as a whole, and gender roles in the organization. In particular, gender roles in the corporate organization are backed by values unchanged from the past, and they are an important factor impeding women’s success in the workplace.

Many are asking what companies need to do to realize organizations in which women can demonstrate their abilities and succeed. It is important that top management fully understand the need for an organization in which women can succeed and implement sincere initiatives to achieve such an organization. While the realization of an organization in which women can succeed involves a number of complex factors such as the culture, atmosphere, history, and distinguishing features of each company, it is important first of all that the organization as a whole shares values based on the firm resolve of top management, with each individual workplace and employee formulating practical measures to realize this goal and customizing related structures and systems. Furthermore, instead of simply changing structures and systems alone there probably is a need to reform the consciousness of employees, particularly male employees. I think a look at the reality that remains largely unchanged even nearly 30 years after enactment of the Equal Employment Opportunity Act for Men and Women shows just how deep-rooted and difficult to solve this issue is. But still, some changes are appearing in management’s consciousness and recognition. It is a fact that when I would give lectures and other presentations on the subject about 10 years ago not a few managers reacted to my words with strained smiles or disagreed with me, but in recent years the number who agrees has increased.

Individuals Have Their Own Strengths and Weaknesses

I am not arguing that all women should join the business world. Both men and women have diverse ways of thinking and feeling about things, and everybody has their own strengths and weaknesses. What I am pointing out is the need to develop organizations and environments in which women who want to play a role in business and have the aptitude to do so can act fully without suffering discriminatory treatment. For example, some men might be better suited to staying at home as full-time homemakers instead of working in companies. If a woman were to leave work after having children the people around her probably would consider it a natural thing to do, but if a man said he wanted to leave work because his child has been born most people would consider it unusual. This is an issue of gender roles. I believe that society should value all people properly for demonstrating their abilities fully, regardless of sexual difference. For this reason, it should not be a problem if somebody, whether man or woman, believes that being a full-time homemaker is the role for him or her and feels true happiness and self-realization in such a way of life, without hindering his or her livelihood.

Diversity is a Competitive Strength

A situation in which women’s abilities are not put to use and women are unable to succeed involves considerable losses to society. From a macroeconomic perspective, Japan is entering a period of decreasing population, and its working population is expected to decrease as a result. The labor of women is becoming essential to maintaining Japan’s economic growth and national strength. Opportunities for women will have not a small impact from a microeconomic perspective as well. For example, there is a high likelihood that the innovative thinking and ideas of women, different from those of men, could strengthen a company’s competiveness when reflected in product development and other activities.
I recently published a book titled Systems for developing women leaders in the organization for which Prime Minister Abe wrote a recommendation. The essence was that diversity is a source of a company’s competitive strength. The Prime Minister has asked the Keidanren to encourage the appointment of women managers, and he is actively encouraging each company to appoint at least one woman director. Today, management’s thinking on promoting women in the workplace needs to change. Developing organizations and environments in which women can thrive and demonstrate their own abilities to the fullest is an important issue for Japan’s future, and it is an essential and unavoidable step toward the future. I am confident that women will transform the future of Japan.

* The information contained herein is current as of November 2014.
* The contents of articles on M’s Opinion are based on the personal ideas and opinions of the author and do not indicate the official opinion of Meiji University.