The pressing issue of global warming

Already the issue of global warming is recognized widely as a global issue. The effects of warming, such as rising sea levels, abnormal weather including fierce typhoons and flooding, and changes in ecosystems, are being felt now, and it goes without saying that there is a need for urgent countermeasures. The main cause of warming has been identified as increasing CO2 emissions, and the CO2 in the earth’s atmosphere is said to have risen by approximately 40% compared to its level prior to the Industrial Revolution. Researchers who have analyzed the gases trapped inside glaciers have reported that the current level of CO2 in the atmosphere is the highest in the past 800,000 years. The need to reduce CO2 emissions to counter global warming would appear to be a widely accepted fact. For this reason, a variety of related efforts are underway in multiple areas, including those of the Intergovernmental Panel on Climate Change (IPCC).
One of the most effective ways of reducing CO2 emissions is by switching the sources of energy such as electric power to natural (renewable) energy such as solar and wind power instead of relying on fossil fuels like petroleum and coal. This is because the burning of fossil fuels is the largest factor contributing to increased CO2 emissions. For this reason, in order to save the world from global warming we must aim to achieve a society that uses zero fossil fuels and is free from CO2 emissions. This requires the spread and expansion of use of renewable energy, but some major issues need to be addressed in order to do so.

One issue involved in increasing the use of renewable energy is that of cost. The cost of generating electricity through solar or wind power is quite higher than that of using fossil fuels. Furthermore, even if their costs can be kept down there are concerns that these energy sources cannot be used properly under current conditions. Basically, electricity is difficult to store for future use. It is generated in accordance with fluctuations in consumption, instead of being supplied from power storage facilities. Since consumption changes by the minute, a balance between supply and demand is achieved through adjusting the output of thermal generators and other equipment. However, since the output of generators that use renewable energy sources cannot be adjusted in this way, traditional energy controls cannot be used with such sources. Looking at this issue in more detail, the only control possible with wind power generation is to reduce the amount of power output by moving the blades. Another problem is instability in the amount of power generated, since this varies with wind speed and intensity of solar radiation in the cases of wind and solar power, respectively. If these cannot be adjusted and controlled, then the spread and expansion of use of renewable energy and the realization of a society that uses zero fossil fuels and is free from CO2 emissions will remain distant dreams.
One key toward solving these issues is the smart grid concept that I am studying. A smart grid is an intelligently designed electric energy network. This concept represents an attempt to use electric energy more intelligently through a networked structure. The “green grid” concept takes this idea one step further. The term “green” symbolizes free of CO2 emissions. In other words, the green grid refers to “creation of a power network that uses renewable energy.” This leads us to the question of what is needed to achieve this goal. 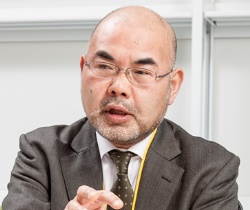 Again, in the case of renewable energy generator output cannot be adjusted and controlled to match consumption the way as it can for thermal power generation. So how can an electric energy network based on renewable energy be controlled? Storage of electricity makes this possible. While we noted above that basically electricity is difficult to store, today some partial storage of electricity is underway. A typical example is a pumping-up electric power plant. Such a plant has an upper and lower reservoir, which it uses to generate power in the daytime by letting water flow from the upper reservoir to the lower one and then pumps the water from the lower to the upper reservoir at night to store it. A pumping-up electric power plant should be thought of as a power storage facility intended to store power in order to balance supply and demand rather than a simple power plant intended to generate electricity. Increasing storage facilities should make it possible to resolve some problems related to renewable energy. However, the number of locations suitable for pumping-up electric power plants is limited, and such facilities already have been constructed on most of them. It is said that it would be difficult to build new ones in the future due to environmental issues and other concerns.
Other attempts to store electricity include flywheels, which store the energy of electricity by converting it temporarily to the physical energy of rotational motion, and compressed-air energy storage, which releases compressed air to generate electricity using gas turbines as a supplementary energy source when needed. However, each of these is restricted to limited applications and has not come into widespread use.

In recent years batteries have attracted attention as a means of storing electricity. Batteries connected to the power network serve to adjust and control renewable energy by releasing energy when consumption is high and recharging to store it when consumption is low. Currently a wide range of storage cell types, including lithium ion batteries, NaS batteries, nickel-hydrogen batteries, and lead-acid batteries, are in use, and further progress is being made on their research and development. Not only is the performance of batteries themselves improving, but overall their costs are decreasing as well. However, realization of an electric power network that uses application of batteries involves not a few challenges. Although batteries’’ costs have decreased, under current conditions their use still remains substantially more expensive than the cost of generating electricity. In terms of performance as well, there are many issues that require study, such as those related to increasing energy density, extending the lives of batteries, and making them safer. My research addresses the topic of whether it would be possible to apply power storage facilities that combine together the properties of each type of storage cell to the adjustment and control of power consumption and generation. One of the important subjects of my research is the economic efficiency of batteries; in other words, their cost. Energy issues are closely related to economics, and it goes without saying that access to low-cost energy is desirable from an economic point of view. I believe that cutting costs is an important topic in power storage.

We are not frogs in a pot 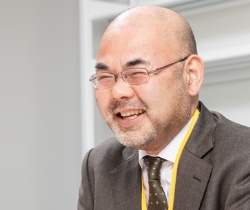 While of course one would expect that a power network for a CO2-free society would require not just power storage facilities but also systems for controlling the output of wind and solar power generation, these remain topics for future study. From the opposite point of view, adjustment and control on the consumer side is conceivable as well. Research already has advanced on these subjects, and feasibility studies are underway in areas such as encouraging consumers to consume less electricity and controlling switches to home appliances directly. In these ways, the subject of my research is very broad ranging, as it studies not just optimization of each element of the power network but also how to optimize the power network as a whole.
Global warming is an urgent issue. Each individual needs to recognize that CO2 emissions increase as a result of our lives becoming more convenient. While policies toward reducing CO2 emissions are important as well, each member of the public also should strive to conserve electricity and be aware of his or her role to play in the adoption of renewable energy. Global warming can be likened to a frog in a pot. If the water in the pot were heated to boiling immediately then the frog would jump right out, but if it warms slowly then the frog will not notice the increasing temperature until it boils to death. The time is coming for each of us to demonstrate with our own actions that we are not like frogs in a pot.