The Masuda Report Warns of the Disappearance of Country Life Q: Calling for the regeneration of the provinces including rural areas, Prime Minister Abe has begun efforts to counter low birth rates and stimulate rural communities. How would you assess these initiatives?

The Masuda Report Warns of the Disappearance of Country Life

Q: Calling for the regeneration of the provinces including rural areas, Prime Minister Abe has begun efforts to counter low birth rates and stimulate rural communities. How would you assess these initiatives?

There is something that needs to be pointed out first. I am referring to the “Masuda Report” prepared by a group led by Hiroya Masuda, a former governor of Iwate Prefecture and a former Minister of Internal Affairs and Communications. While the report has been presented a number of times, it had a particularly explosive impact on the national conversation when reported to the Japan Policy Council subcommittee on depopulation in May 2014. This report brought increased attention to the subject by using its own methodology to estimate the population of young women (those aged 20-39) in 2040, describing communities in which this population was projected to fall by one-half or more from its current level as communities threatened with disappearance. A later publication containing the report further escalated the threat, to one of the disappearance of not just municipalities but entire regions.
Immediately after that, Prime Minister Abe in a cabinet reshuffle appointed Shigeru Ishiba to the position of minister in charge of regional regeneration, establishing a working group to promote regeneration of communities, populations, and employment. The Masuda Report had led to moves being made within the government, and one cannot help but sense some political intents and complicated motives in this development. What I consider the most important point is the need to avoid the disappearance of regions, municipalities, and rural communities where depopulation is said to be advancing.

The Objective is the Dismantling of Rural Communities

Q: What is the objective of the theory of disappearance of rural communities as seen in the Masuda Report?

One cannot help thinking that it is the dismantling of rural communities one and all. Some argue that if low birth rates and the ageing of population continue and the places where people live become spread out and separate from each other then it would involve higher costs for community services. The efforts that already have begun toward consolidation of facilities such as hospitals and schools are intended to build an efficient, economical national infrastructure.
Such an argument aims to form central, compact cities in key regions, attracting people who live in rural areas such as small villages to relocate to the city. This would mean nothing less than the dismantling of rural communities. Encouraged by the argument that rural communities would disappear, some have begun to argue for creating more efficient national infrastructure, welfare, and agriculture without a need for rural communities that are in the process of disappearing. I am completely opposed to this argument. Rural areas, particularly rural villages, are still very much alive.

The Resilience and Critical Points of Rural Communities

It is true that depopulation and the ageing of population are advancing. Already depopulation and the ageing of population are starting to be felt painfully in the rural villages in the mountainous areas of the Chugoku region in western Japan, where the issue of depopulation was identified first in the 1960s. For this reason, in some cases efforts have been made to build sustainable systems to support an ageing society through use of the wisdom and effort of local residents. This definitely helps to make the communities more resilient. As one example, the practice is widespread across the region of weekend farming, in which people from succeeding generations who have left for other areas return to their parents’ homes to take part in farming on the weekends. These families overcome spatial differences to contribute to maintaining their communities through agricultural work. This can only be because the people who live in rural communities have a strong desire to keep living in them in the future. The regional development efforts that were put in place after the collapse of Japan’s bubble economy of the 1980s were one such system intended to enhance this resilience. Unlike development efforts from outside the community, such as the development of resorts during the bubble years, these efforts have promoted community development aimed at growth arising from within the community. There are various and diverse efforts being made in the rural communities of the mountainous areas of Chugoku in particular. As one of the first areas in Japan to experience depopulation and flight of residents away from the area, it also is a leader in regeneration efforts. This can be described as a frontier for the dismantling and regeneration of communities.
At the same time, there are some critical points in rural communities. This is the phenomenon in which if the people in a community lose their drive as a result of a strong impact from outside, such as a natural disaster, then this becomes a sense of resignation that leads to the rapid stagnation of activities in the community. There even is a possibility that the Masuda Report’s argument about the disappearance of rural communities could have become such an external impact. If the people trying to pass their communities along to the next generation are made to lose their drive, then rural communities truly will cease to exist. I think that when talking about regional regeneration we should avoid throwing around ideas such as the possibility of disappearance of communities, which could foster a sense of resignation.

A Return to Rural Living has Begun

Q: Are there any new movements intended to help rural communities and regions to survive amid depopulation, instead of disappearing?

In fact, interest in rural communities is increasing among urban residents, chiefly those in the younger generation, and not a few people are interested in relocating to rural communities. I would like to call this large-scale trend a “return to rural living.” The argument for the disappearance of rural communities can be said to be characterized by a complete disregard for this trend toward returning to rural living.
This movement is said to have begun in the mid-1990s. Furthermore, in 2009 a system of community regeneration volunteers was established with the support of the Ministry of Internal Affairs and Communications. Intended to support regeneration of rural communities, these volunteers are provided with a fixed salary for up to three years if they relocate to rural communities. Already about 1,500 people are active in rural farming, mountain, and fishing villages under this program. About 80% of these are young people aged in their 20s and 30s, and according to a recent survey more than 50% choose to stay in the communities permanently.
This change in young people’s way of thinking is something that we should look at closely. The number of young people who without prejudice see rural communities as warm, attractive places and actively accept the close interpersonal ties of such communities instead of rejecting them is increasing. Attention also is focusing on the new lifestyles that are developing at the same time as this movement. For some time people have discussed the way of working in which a person spends half of his or her time on agriculture and the other half on occupation “X.” Today, the content of the occupation “X” portion of this way of working is growing even more diverse. This way of working is referred to as a trade. Increasingly, instead of seeing a trade as being unstable, young people see it as a new lifestyle that combines one’s work and way of life into one. 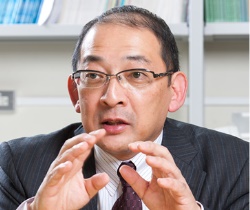 Q: How should the public think of rural communities in the future? Do you have any recommendations for society?

In the past, urban and rural communities were rivals. But the past 50 years have seen progressive depopulation of rural areas and concentration of population in Tokyo. I believe that the realization of a return to rural living energized in a way as a counterargument to the arguments for the disappearance or dismantling of local communities suggests a major fork in the road for our society. We are faced with two choices: Should we build a society centered on the global metropolis of Tokyo, proceeding with the dismantling of rural communities while advocating a path toward growth, or should we build a society in which urban and rural communities coexist, with each region having its own unique character, while promoting a return to rural living? Today we need a national conversation on the kind of society we will build in the coming half-century, based on what we have learned in the preceding half-century.
Mother Theresa said, “The opposite of love is not hate, it’s indifference.” For a long time, most urban residents have been indifferent about rural communities. While people are beginning to become more interested in rural communities today, there is a need for even greater national interest in the subject and for a discussion based on sincere love. The last thing I would like to note is that rural communities will not disappear.

* The information contained herein is current as of January 2015.
* The contents of articles on M’s Opinion are based on the personal ideas and opinions of the author and do not indicate the official opinion of Meiji University.