About 90 years ago in 1926, the pursuit of the ability to broadcast images from afar in real time began with the transmission and display of the Japanese kana character “i” by Kenjiro Takayanagi, known as “the father of Japanese television.” This was the start of the history of television in Japan. Later, in 1953 TV broadcasting began in Japan, and in 1960 full-fledged color TV broadcasting began as well. Already four years after that, Japan’s public service broadcaster NHK began development of high-definition television (HDTV). After graduating from university I joined NHK, and after working at a local affiliate I was assigned in 1986 to the NHK Science & Technology Research Laboratories. At that time NHK began high-definition transmission experiments, and I took part in that research and development as well.

About 90 years ago in 1926, the pursuit of the ability to broadcast images from afar in real time began with the transmission and display of the Japanese kana character “i” by Kenjiro Takayanagi, known as “the father of Japanese television.” This was the start of the history of television in Japan. Later, in 1953 TV broadcasting began in Japan, and in 1960 full-fledged color TV broadcasting began as well. Already four years after that, Japan’s public service broadcaster NHK began development of high-definition television (HDTV). After graduating from university I joined NHK, and after working at a local affiliate I was assigned in 1986 to the NHK Science & Technology Research Laboratories. At that time NHK began high-definition transmission experiments, and I took part in that research and development as well.

As is well known, HDTV high-resolution images, and use HD television has spread widely among the general public in Japan since the start of digital satellite broadcasting in 2000 and digital terrestrial broadcasting in 2003. In the past, it was thought that digital HDTV would not be possible until sometime after the 21st century. Digital broadcasting uses much higher amounts of data than analog, with an HDTV signal carrying about five times the data of a standard-definition television (SDTV) signal, and it was expected that it would take some time to establish the necessary video-data-compression technologies. Furthermore, HDTV transmission faces the absolute limits of bandwidth, and the difficulty of realizing the transmission of large volumes of data using existing bandwidths had been pointed out. But in the 1990s the Moving Picture Experts Group (MPEG) established by the International Organization for Standardization (ISO) and International Electro technical Commission (IEC) made progress on activities to standardize video data compression, leading to technological advances that helped to realize digital HD broadcasting.

The presence of 4K TV 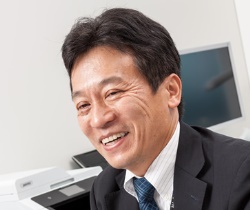 Rapid advances in computer CPU and memory technologies helped to drive the development of digital HDTV. In response to the start of digital HDTV broadcasting around the start of the 21st century, NHK began R&D on ultra-high-definition television (UHDTV). This is so-called 8K SHV (SUPER Hi-Vision) technology. Existing HDTV is known as 2K TV. The numbers 2 and 8 in these terms indicate numbers of pixels. In the world of digital technologies, two to the tenth power (1024) is represented using the capital letter K. An HDTV image is made up of a structure measuring 1920 pixels horizontally and 1080 pixels vertically. Since the horizontal figure of 1920 can be rounded up to 2000, this is referred to using the term 2K. The 8K SHV now under development measures 7680 pixels horizontally and 4320 pixels vertically, and it is called 8K after rounding the 7680 to 8000.
In between these two technologies is 4K TV, which appeared after the 3D TV boom. The 4K TVs on sale today simply feature 4K displays, which make some improvements to the resolution of images from existing 2K HDTV broadcasting. As seen from the fact that a consortium of broadcasters and electronics makers aiming to promote next-generation broadcasting technology has only recently begun experimental 4K broadcasting, true 4K TV, including transmission and reception equipment and systems, has not yet been established. In not a few ways, 4K merely represents a step in the evolution of TV technology from 2 to 4, and from the start NHK has advanced R&D toward an 8K standard. This is because 8K TV is the ultimate in television.

Development of the ultimate 8K TV

The ultimate in television refers to TV that realizes an overwhelming degree of realism, like the images seen by the human eye. To use a flower vase as an example, even though a vase seen in front of one’s own eyes differs from one broadcast on TV, the human brain makes up for the difference and sees them as the same thing. However, 8K TV is as close as possible to the resolution visible to the human eye. Its video format is designed based on the sight of a human having visual acuity of 1.0, with the standard visual range being the distance at which the pixel structure is not visible to the eye. Put simply, if the viewer can see the pixels of the scan line on the screen, it detracts from picture quality. Also, the angle of view of 30° in existing HDTV has been designed to enable the viewer to focus on the information on screen using eye movement and receive specific information instantaneously. In the world of 8K technology this is transformed completely. Its angle of view of 100° includes the surrounding scene in the image, expanding the field of view to the extent that it affects the viewer’s sense of spatial coordination. Since its visual range, in terms of its ratio to screen size, is one-fourth that of today’s HDTV, it requires ultra-high resolution of 7680 horizontal and 4320 vertical pixels, at which the viewer will not sense the screen’s scan-line structure. In addition, it expands the range of color to realize colors close to that of real things. Another issue in large-screen/high-resolution TV is the blurring visible in a fast-moving subject. 8K technology attempts to solve blurring by using a frame rate of 120 frames/second vs. that of 60 frames/second in existing HDTV.
With the resulting overwhelming degree of realism, 8K technology can be said to have achieved a level of resolution like that of the human eye. Incidentally, while one tends to think of 16K as the next step after 8K, in fact 8K is considered a critical point at which even if better technology were to be developed it would not show much improvement over 8K. The image compression technologies that are one of my areas of specialization are essential to transmit SHV signals containing massive amounts of data. Recently I developed the first encoder (video-data-compression equipment) in the world to use the latest high-efficiency compression standard, which can be described as the first unit on the path toward realizing 8K SHV broadcasting. I would like to continue further study and improvements on this technology in the future. 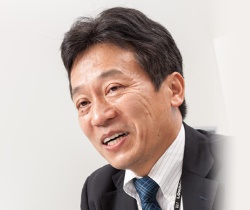 Plans call for experimental 8K SHV broadcasting to begin in 2016 during the Rio de Janeiro Olympics and for full-fledged broadcasting to begin in 2020 with the Tokyo Olympics, as the technology spreads to ordinary households. Some argue that there are not many people looking for the ultra-high-resolution images and accompanying realism of 8K technology. They see contemporary HDTV as good enough. However, many change their opinion after experiencing 8K technology once. 8K TV will deliver considerable benefits in society and people’s lives. It will make it possible to enjoy ordinary TV viewing with more experiences, more power, and more beauty, and it will be less tiring. But 8K is not restricted to home TV use alone. During the London Olympics, 8K SHV was used in public viewing events, and the technology will make possible a variety of public viewing events for stage and sporting events. In addition, some of the highest expectations for the technology concern applications in the medical field. It is thought that high-resolution images will be used in the operating theater for fine surgical procedures on organs such as the heart and blood vessels. Realizing the level of resolution of the human eye means the possibility of information input/output and processing at the same level as the human eye. It should be possible to use this technology to support people with disabilities as well.
These are only a few examples. 8K technology can be deployed in a wide range of ways in various directions, bringing about the advent of an age of putting imaging technologies to their fullest extent. Incidentally, 8K SHV is a field of technology in which Japan is a world leader. Its realization also has the potential to trigger a revitalization of Japan’s electronics industries. The realization of 8K SHV should make considerable contributions to human society and ways of life, impacting a wide range of fields.