Lately, we often hear discussions related to autonomous driving. It is said that automobile manufacturers around the world have been competing fiercely to develop these technologies. But the purpose of autonomous driving varies from country to country, and because of this, the systems which utilize such technologies also vary. 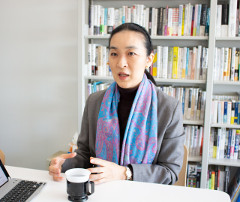 Although autonomous driving has been described as a dream technology, testing of autonomous vehicles on public roads has already begun in the United States and other countries, and they should be ready for practical use in the near future.

Certainly, U.S. technology is said to be leading the world by far. Behind the scenes is the advancement of development through industry, academia, and government collaboration.

The United States was the first in the world to establish a long-distance competition of autonomous vehicles in 2004. It was organized by DARPA (Defense Advanced Research Projects Agency), a research agency of the United States Department of Defense.

The first competition was held in the Mojave Desert, located in southwestern United States, but none of the autonomous vehicles completed the 240-kilometer route.

However, in the following year, a team made up by Stanford University and Google won the competition. Google later launched a company called Waymo, which began focusing on the development of autonomous driving technology.

The 2007 DARPA competition took place at the site of an Air Force base, where a replica of an urban-area course was created. Around this time, development started in full swing, in anticipation of the practical use of autonomous vehicles on public roads.

Today, some states in the U.S. allow testing of autonomous vehicles on public roads, from which Waymo collects various data.

For example, many sensors installed on the car analyze, at high speed, the image data that identifies other vehicles, obstacles, and people around the car while in motion, as well as traffic signs and the color of the traffic lights.

Currently, Waymo is said to have outperformed other research teams around the world in the development of fully autonomous driving technology.

Autonomous driving technology with the goal of driverless operation, which originated from DARPA, could probably fall under the theoretical category of “disruptive innovation,” coined by Clayton Christensen, a world-famous researcher on business administration.

In the late 1950s, the United States lagged behind the Soviet Union in the development of satellites. This led to the establishment of DARPA, so that the U.S. could keep up with competing countries in technology development.

Disruptive innovation is different from the type of innovation promoted in Japan. These reflect the cultural differences in each society; it is not a matter of which is better or superior.

For example, the automobile industry today is considered “disruptive innovation” from the perspective of the horse wagon age. Nowadays, compact cars, made by Japanese and European automobile manufacturers in particular, are dominating the world market. The success of technological development will not necessarily continue to be an advantage.

Positions of the United States and Japan toward autonomous driving

Disruptive innovation cannot be achieved by new technology development alone. A system to distribute it throughout society also needs to be designed.

For example, no matter how extensively autonomous driving technology has been developed, the practical use of autonomous vehicles would not make progress without testing on public roads.

American society has the capacity to allow public road testing. They have a system in which industrial, academic, and government organizations unite and take essential measures depending on the level of technological development.

For example, there are five levels of autonomous driving according to the level of automation.

This standard was created by SAE, a private organization in the automotive industry. The national government establishes and updates guidelines based on this standard.

In 2016, a Level 3 autonomous car caused a fatal accident during a public road testing. After thorough investigation, it was determined that the accident was caused partly by human error.

At Level 3, when the vehicle detects abnormal conditions, it issues a warning and requests the driver to take control. However, the driver ignored this warning and let the vehicle continue driving without assuming control of the wheel.

The National Highway Traffic Safety Administration of the United States Department of Transportation also pointed out a lack of safeguards in instances of overreliance on the vehicle’s automatic circuit and urged the development team to develop a mechanism to deal with these kinds of situations.

It is desirable for society that technology and rules co-evolve – I think this is one factor that allows for the United States to have a society in which “disruptive innovation” is easily generated.

Currently, one possible way to utilize autonomous driving in Japan is for public transportation, such as buses. It could become a useful means of transportation in areas that suffer from an aging population as well as depopulation; therefore, safety and convenience need to be secured.

Given the rapid aging of the population in Japan, and the increase in the number of fatal accidents involving the elderly, it is recommended that elderly people voluntarily surrender their driver’s license. This is why it is becoming even more important to utilize autonomous driving technology in vehicles driven by the elderly as well as in public transportation.

The direction of new technology development shifts depending on the demand and needs of society at large.

A system that we create for ourselves

There are internationally comparable data taken from analyses of consumer awareness of fully autonomous driving services. According to the data, there is a tendency for people in the United States, China, and India to have a high level of awareness, while those in Japan and Germany have a low level of awareness.

For example, the value of so-called “big data,” which combines existing enormous amounts of public and private data with customers’ individual data, has become dominated by only a few platformers.

Because of this, consumer life as well as information distribution is, in a sense, also could be manipulated.

Furthermore, technological innovation, such as AI, IoT, and 5G, is progressing at a tremendous pace. In parallel, autonomous driving technology is progressing.

Statistics show that self-evaluation of computer skills by Japanese people is low among developed countries. This could be attributed in part to the fact that both adults and students have had less access to computers.

Seen in that light, programming education provided at elementary schools would be a good icebreaker. It is also important for working citizens to take initiatives in learning opportunities and society and companies to provide such opportunities for them.

Of course, this will not give ordinary citizens like us opportunities to be involved in technology development, but we are the ones who take part in forming the rules through which such technology will be utilized.

I think it is crucial for us to take an interest in new technologies and their uses, so that innovation will move forward in the right direction for our society.