Halting the Drift Toward Greater Hate Due to Trump’s Victory

Although Donald Trump became the 45th U.S. President on Friday, January 20, it was reported during the campaign that Hillary Clinton was favored to win. It is important to not only analyze the reasons that Trump, who was considered to be at a disadvantage, won the election but also consider what trends this has established. 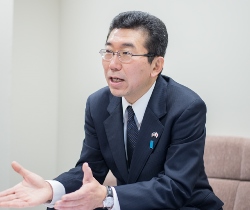 As one part of my research on U.S. presidential elections, I worked as a canvasser for the Hillary Clinton campaign and visited more than 3,300 households in eleven states. Because of this experience, I truly felt that I had no idea of which way the election would fall. One reason for this is that as I visited individual houses, I came to deeply understand that some independent voters faced a dilemma until the very end of the campaign. I refer to these people as “caught-in-a-dilemma independent voters.” It was impossible for them to decide who to vote for because they said that “Trump lacks the qualifications to be president,” but “Hillary lied about the emails.” According to surveys conducted by TV stations, caught-in-a-dilemma independent voters accounted for about 30% of the electorate. What had a major impact on their choice were the October surprises.

An “October surprise” refers to an unexpected development that occurs about a month before election day and has a major impact on the results of the election. For the 2016 election, both candidates faced October surprises. First, it came to light at the beginning of October that Donald Trump had not paid any federal income tax, and people began to have doubts about him. However, people grew suspicious of Clinton when the content of a private speech she gave at the Wall Street firm Goldman Sachs was uploaded to WikiLeaks. The speech revealed that she made the case for free trade even though officially opposing the Trans-Pacific Partnership. This was then followed by Trump’s crude comments about women and women scandals, which many people viewed harshly. At that time, it was widely reported that Clinton was favored to win, but eleven days before the election, and Director of the Federal Bureau of Investigation James Comey announced that he was relaunching an examination into Clinton’s emails, and the contours of the election once gain changed. Although the decision was made not to relaunch the investigation, that announcement occurred two days before the election. As a result, 47% of caught-in-dilemma independent voters, who made up 30% of the electorate, voted for Trump, and only 42% voted for Clinton. With October surprises, the focus is not simply on the surprising development but also on the ability of the candidate to manage the crisis. One could argue that there was a major difference in how Trump dismissed the crude comments as mere “locker room banter,” but Clinton was unable to effectively respond to the email problem. 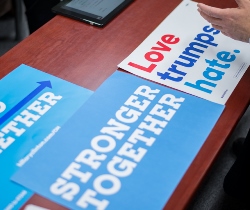 Furthermore, throughout the Presidential election, there felt to be a difference in the sharpness of Trump’s message and Clinton’s message. Since announcing his candidacy on June 16, 2015, Trump consistently communicated a message of “making America great again.” Thoroughly based on being against immigrant, free trade, and globalization, the message crystallized the frustrations and anger of white workers and white veterans with low paying or no jobs, creating a “single-culture alliance.” Trumps message possessed a sharpness and power that excited discontented whites.

On the other hand, having adopted the campaign model of a “multi-culture alliance,” the same one used by President Obama, Clinton based her argument on being the first female U.S. president, but she was unable to generate the same level of excitement as that for “electing Obama the first black U.S. president.” This was partly because of her message. When Clinton launched her campaign in April 2015, her first message was “fighting for the middle class.” Her campaign felt, however, that this message was not taking root, and in July 2016, she began to communicate a message of “stronger together.” In fact, while canvasing in New Hampshire in August 2015, I was told by a white female independent voter, “Trump, not Clinton, is fighting for the middle class.” Even one year before the campaign changed its message, canvassers working on her campaign felt that the initial message was not resonating with voters. In other words, for fifteen months after launching her campaign, there was a vacuum related to her message, and Trump’s message steadily found its way into the hearts of the white working class.

Because Trump’s message was extreme, it generated a completely new type of supporter, who I call “hidden Trump supporters.” When canvassing, even if I asked if Clinton could count on their vote, some white people would not clearly respond but simply smile. They were Trump supporters but did not want to clearly show their attitude since they did not want people to consider them racists or sexists. In addition, there were some who said that they were voting for change, not Trump. For them, Trump would bring change, but they did not clearly state this. These people were classified as “undecided” in the data. Some people who saw that I was wearing an official Clinton hat and button would close their door and not come out. These people were also hidden Trump supporters, who were concerned about what their neighbors would think of them. In the data, however, they were classified as “refused to answer.” These hidden Trump supporters threw off the Clinton campaign’s data, and resulted in strategic mistakes. When I was compiling data for Virginia, 20% were classified as “undecided,” and 10% as “refused to answer.” In other words, up to 30% of the people were hidden Trump supporters. The major media outlets were also unable to obtain accurate information for the same reasons. It was the Trump campaign that possessed the most accurate data. Trump’s campaign registered supporters online. His supporters formed a network and communicated with the Trump campaign via the Internet, where they did not have to worry about looking like racists of sexists to neighbors. Furthermore, Kellyanne Conway, who took over as the campaign manager midway through the election, is an expert pollster. She conducted surveys of supporters over the Internet, and the questions were strategic ones, just like those used by the Obama campaign in 2012. 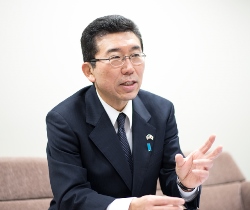 Three words that clearly indicate the distinctive aspect of Trump are cost, efficiency, and fairness/unfairness. For example, while Clinton focused on the ground game, mainly canvassing, Trump made effective use of Twitter. Canvassing is extremely effective, but entails costs, and is inefficient. On the other hand, Twitter is efficient because it is possible to instantaneously spread a message for little money. Furthermore, Trump’s message was always one of anger against inequality. Every time Trump expressed anger at the “unfairness of the presidential election system that favored establishment candidates,” “unfairness of the lying media,” and “unfairness of debate moderators favoring Clinton,” white working class voters who were unhappy with and felt they were being treated unfairly compared to immigrants and the establishment could identify with the feeling and were excited.

Presidents in the past touted common values of “democracy,” “freedom,” and “human rights,” but Trump’s values are his own, such as those listed above. The world, including Japan, will have to negotiate with a new U.S. president who does not place much stock in the shared values that have been built up over the years. Many aspects of what this will lead to are still unknown.

What is definite is that because of Trump’s victory, there is growing trend toward anti-immigration, anti–free trade, and anti-globalization throughout the world, and hate toward cultural diversity has grown. Clinton touted the slogan, “Love trumps hate,” but now that Clinton has lost, someone has to stop this trend. President Obama hopes that German Chancellor Angela Merkel will be that person. In the congratulatory message regarding Trump’s victory, Merkel stated, “If Trump shares our values (democracy, freedom, respect for rights, and valuing the dignity of all people), I am prepared to work with him.” I believe that as President Obama expected, Merkel is our hope.