Is there an Olympic Movement happening in Japan?

There have been a variety of gender and sexual related problems in the sports world in recent years. What is behind these problems? And how should Tokyo, which is hosting the 2020 Olympics, and Japan address such problems? 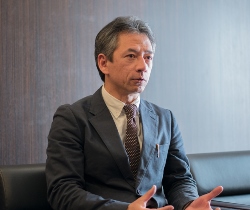 Until just a few years ago, the Fundamental Principles of Olympism in the Olympic Charter defined: Any form of discrimination with regard to a country or a person on grounds of race, religion, politics, gender or otherwise is incompatible with belonging to the Olympic Movement. “Sexual orientation” was added to the existing discriminatory items in the 2014 Olympic Charter. The reason for this is that social recognition of sexual minorities, known as LGBT, has now been gained. The sports world has also been addressing this issue. As a matter of fact, in the year prior to the 2014 Winter Olympics in Sochi, the host country, Russia, implemented an anti-homosexual statute. Although this did not receive much media coverage in Japan, it was widely covered in Europe and the United States, where many athletes protested it as being incompatible with Olympism. To quell the furor, the government of Russia compromised such that their domestic law would only be applied to Russian citizens. Subsequently, as described above, the term, “sexual orientation,” was included in the Fundamental Principles of Olympism.

Needless to say, this does not mean that all the problems were solved. In general, a strong bond tends to be developed among same-sex members of any sport. Because of this, in team sports especially, if members learn that their teammate is gay, it often provokes feelings of repulsion or a sense of rejection toward that gay member. Teammates spend long hours together during the game, where a sense of solidarity is built, as well as in the locker rooms and showers where their bodies are exposed to one another. Situations like this trigger a sense of concern among some members that their gay teammate may have sexual desires for them. However, it is naive to think that a gay person always sexually objectifies other people of the same sex, or that they may attack you, this sort of thinking is prejudice. Such prejudice cannot be dispelled overnight, however, this type of prejudice has been gradually disappearing due in part to the IOC’s efforts as mentioned earlier. During the 2016 Rio Olympics, many more athletes declared their homosexuality.

“Intersex” will be an important challenge for the future

Then again, gender and sexual issues are complex. One example is an athlete with both male and female sexual characteristics. There are still various arguments about Caster Semenya, a South African 2016 Olympic gold medalist in the women’s 800 meters. What is the problem with Semenya’s case? It has always been a fundamental principle that women and men participate in competitive sports separately. The main reason for this is that mixed competition puts female athletes, who have less muscle mass than male athletes, at a disadvantage. Between 1968 and 1999, a sex test was required for Olympic female athletes. Although this test is no longer required, for special cases like that of Caster Semenya, androgen hormone (testosterone) levels are measured because testosterone is strongly linked to muscle mass. Current regulations stipulate that a female athlete with testosterone levels more than 10 nmon/L, which is the lower limit for male athletes, cannot participate in women’s competition. However, scientific evidence that demonstrates a relationship between testosterone levels and athletic performance has not yet been established. In the near future, a new index may be adopted following advances in medical science. In any case, sexual distinction in the current sports world is no longer determined only by biological factors, such as internal and external genitalia, and chromosomal makeup. Rather, it has reached the point where hormone levels are used as an index to maintain fairness in competition.

Rightfully, Semenya participated in the Rio Olympics after meeting this regulation. However, we should not forget that she experienced a considerable invasion of privacy throughout the ordeal. Following her much-improved performance in competition, questions were raised about her sex. It was said that Semenya and her family had not realized until then that she was intersex. However, she was subjected to various tests so that her records would be officially recognized, and she could continue her competitive career as a runner. What’s more, her test results, which were supposed to be kept secret, were leaked and became public knowledge. Actually, there was also a Caucasian female marathon runner who criticized Semenya’s participation in the women’s competition. However, according to a researcher, there was a 12% disparity between Semenya’s 800-meter record and the record of the top male 800-meter runner while there was only a 10% disparity between the record of this Caucasian female marathon runner and the record of the top male marathon runner. In other words, this Caucasian female athlete set a record closer to the male record when compared to Semenya’s record. But she was never suspected or subjected to tests concerning her sex. If Caster Semenya had been a typical Caucasian, she may not have had her privacy invaded to that degree. I can’t help but think that her race, in addition to her sexual issue, is a contributing factor to the criticism of Semenya. There are a myriad of factors, such as race, religion, nation, and gender, intertwined on the stage called sports.

Raising awareness is required within the world of sports in Japan 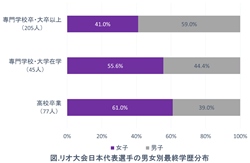 Various efforts to solve such and sexual issues by the sports world globally have hardly attracted much attention in Japan. Speaking of gender issues, although the number of Japanese Olympic female athletes has been larger than that of male athletes, the coaches and officials in the sports associations are male dominated. This makes it difficult to reflect women’s opinions in the decision-making of such sports associations. Part of the reason for less female officials is Japan’s social structure which tends to emphasize academic background, and also hinders the entrance of women into the workforce. The figure shows the academic background of male and female Japanese athletes who participated in the Rio Olympics. It shows that there are more high school graduates among the female athletes, and more college graduates among the male athletes. Such a marginal difference could impact women’s participation in terms of the decision-making. The college admission system, which is based on athletic performance, needs to be reconsidered from this point of view.

Another reason is that athletes do not learn how to act on their own initiative in Japan’s sports coaching. Both male and female athletes faithfully do what they are told by their coaches, but nothing else. This coaching style continues even to this day in Japan. This will not help develop leaders among athletes. 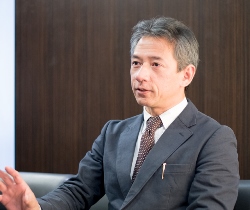 The 2020 Olympics will be a perfect opportunity for Japan to make these changes happen. However, there have been few opportunities to think or talk about Olympism or the Olympic Movement, which serves as the cornerstone of the Olympics. The Olympics are not just a mere sports competition, but rather a global activity with individual growth, mutual understanding and international peace as its principles. Under the principles of Olympism, there are a variety of daily activities including cultural activities. Every four years, the Olympics take place, involving people from around the world, as the core event that summarizes all these activities. If we do not understand this, and only pay attention to the design of the arena and the budget, or medal count predictions, we will never mature as a society. It is the responsibility of the city and country hosting the Olympics, especially, to understand Olympism, and to communicate it to the rest of the world in order to promote the Olympic Movement. What is required of us now is to reexamine and achieve the fundamental principles of Olympism without just idealizing them. Hosting the Olympics is a rare privilege. It is time for us to put efforts into the Olympic Movement which will give the society of Japan a chance to mature.

* The information contained herein is current as of February 2017.
* The contents of articles on M’s Opinion are based on the personal ideas and opinions of the author and do not indicate the official opinion of Meiji University.